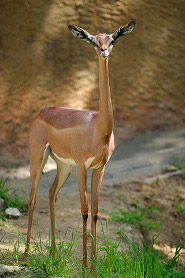 The Gerenuk (Litocranius walleri) is nature's little acrobat, able to stand upright on its back legs to graze from higher branches. The name actually means "giraffe-necked" in the Somali language. An herbivore, it is a member of the gazelle family.

This delicate mammal received its name because of its long neck and legs. The head is small and wedge-shaped with eyes and ears that are large. The tail is tufted and the body has a reddish color in a saddle shape on the back with cream colored legs, and white underpants. The tail is tipped with black hair, making it easily distinguished from other gazelles. The forehead is typically brown with a distinctive blaze on it. The generuk weighs in at about 100 pounds 45 kilograms. They stand roughly three feet, or .9 meters, tall at the shoulder.

The generuk has the unique ability to stand upright in order to pick the select leaves from higher branches. The lumbar vertebrae are stronger than in other animals. It also has stronger lower limbs and wedge shaped hooves. Its acrobatic balance is so refined that it can actually use its front legs to pull higher branches down within dining range.

Generuks prefer the dry habitat of the desert and the bush of the savanna. It also makes its home in the woodland forests in the region. Found in

listofcountriesoftheworld.com/so-animals.html" title="" rel='external'>Tanzania, Ethiopia and Somalia it does not require regular supplies of water. It is able to fill its water requirements from the plants it dines on.

Generuks are herbivores and enjoy eating tall bushes, leaves and shoots. They don't dine on grass but do enjoy buds, flowers and fruit of climbing plants. They prefer small groups to large herds and are typically found in groups of 2 to 6 females with one male.

Predators include large cats and wild dogs as well as most other large carnivores native to the area. Specifically, cheetahs, lions and leopards are predators of the generuk. When these animals feel threatened, they stand completely motionless to watch for the danger. Its movable ears are perfect for turning to hear sounds from all around them.

The generuk are not considered endangered, although there is a need to protect the areas in Africa that they are native to. Protecting their habitat can help protect this species as well as countless others.

The Gerenuk is listed as Conservation Dependent (LR/cd), the focus of a continuing taxon-specific or habitat-specific conservation programme targeted towards the taxon in question, the cessation of which would result in the taxon qualifying for one of the threatened categories below within a period of five years, on the IUCN Red List of Threatened Species

Some facts about the
Gerenuk