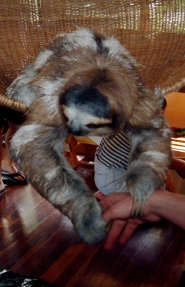 The pale-throated three-toed sloth (Bradypus tridactylus) has a round but blunt head, small eyes, a slightly pointed nose but does not have visible ears, but it can hear. It lives a solitary life high up in the treetops of South American rainforests from Northern Argentina to Southern Honduras.

This sloth is not considered endangered, but needs Crecopia trees to survive. If the rainforest is destroyed, the chances are high that the pale-throated three-toed sloth will go extinct. Keeping it in captivity is difficult. Although slow and reliant on trees, the pale-throated three-toed sloth is far from helpless. Its three huge claws on each forepaw, which can grow up to 2.5 inches (6.35 centimeters) long, can defend itself against jaguars and ocelots. It is also an excellent swimmer.

Pale-throated three-toed sloths do have pale-colored throats. Their heads are shades of brown, the noses black, and their main body hair are in shades or grey, black and dark brown. However, many adults sport patches of dark green because algae grow in its shaggy fur and the sloth does not remove it. The green shades help it to blend in with the tree leaves in which it lives and feeds. Males have a bright yellow or orange splotch on their backs. Females have two prominent breasts in between their forelimbs.

Pale-throated three-toed sloths breed year round. After a gestation of 141 days, the female gives birth to a single baby. The female does all of the work caring for the youngsters. She nurses the baby for one month, and then feeds the baby Crecopia leaves, twigs and buds from her own lips. She will care for the baby until it is about 9 months old, then it goes off on its own.

How slow are sloths?

It takes about one month for it to travel one mile. Sloth metabolisms are so slow that it only needs to urinate and defecate once a week. The sloth does this on the forest floor and then goes back up into the canopy. With luck, the sloth can live 12 years, although one pale-throated three-toed sloth in captivity lived to be 31.

Picture of the Pale-throated Three-toed Sloth in a rehabilitation center in Costa Rica by Connor Lee. A very young two toed sloth, in a cardboard box, is being hand fed in the righthand background. The cardboard boxes all have towels or blankets in them and are used as beds for the sloths being rehabilitated. Picture licensed under GFDL and under the Creative Commons Attribution ShareAlike 3.0 License

The Pale-throated sloth, pale-throated three-toed sloth is listed as Least Concern. Does not qualify for a more at risk category. Widespread and abundant taxa are included in this category, on the IUCN Red List of Threatened Species

Some facts about the
Three-toed tree sloth