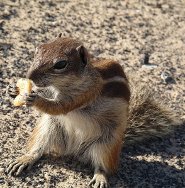 Barbary Ground Squirrel (Atlantoxerus getulus) has a head and body length measures 160 - 220 mm (6.3 - 8.7 in) and their tails are proportionately larger measuring 180 -230 mm (7.1 - 9.1 in). They are recognized by their white stripes down both sides or their body and sometimes one stripe that runs straight down the back. Their fur is much like other squirrel species being short and stiff. They are precocious mammals who do not let their miniature stature, weighing a mere 300 -350 g (10.6 -12.3 oz), keep them from making their presence known in their habitats. They are easily seen and forage for food in the daytime hours.

These squirrels are unique in that they have refined food preferences. They are omnivores, but their favorite snack is the rich olive-like fruit off the Argan tree which is native to Morocco. They have also been reported to eat the fruit of this tree and even apples out of the hands of tourists to the region. Barbary Ground Squirrels are photographed often when they seem to pose for their guests seemingly unafraid of people. These squirrels have become an invasive species in some places due to the lack of predators.

The species is plentiful in Morocco, Algeria, the

They can be found in subtropical climates including tropical dry shrub land and rocky areas of temperate grassland. Burrowing is the favored way to build nests, but they also seem quite comfortable making dens in large groups of rocks. Their families become large when they are established in an area as they breed twice a year and have around 4 pups per litter. This breed of squirrel’s young grow up rather quickly and start families of their own. They have been introduced to other places throughout the world like the Canary Islands where it was introduced in 1965 as a pet to Fuerteventura Island (For an interesting, yet scientific read, go to this paper on the matter). The squirrels are surprisingly intelligent and outwit would-be predators a lot of the time.

The Barbary ground squirrel is listed as Least Concern. Does not qualify for a more at risk category. Widespread and abundant taxa are included in this category, on the IUCN Red List of Threatened Species

Namings for the Barbary ground squirrel

Some facts about the
Barbary ground squirrel