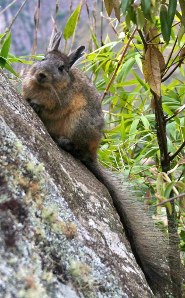 The Northern viscacha (Lagidium peruanum), which is also sometimes called the Northern mountain viscacha, is a rodent and a member of the chinchillidae family, which also includes chinchillas. These little guys can be found in Peru, northern Chile and possibly Bolivia and Ecuador. Although they are typically found between the timber and the snow lines in the Andes Mountains at elevations between 3,000 to 5,000 meters -- or 10,000 feet to 16,000 feet -- they can also be found in low coastal ranges at only 300 meters -- or 980 feet. In addition, the northern viscacha is one of only 70 mammal species that live in the unique Winter Rainfall-Valdivian Forests in Chile.

Northern viscachas make their burrows in the crevices of the rocky habitat they prefer and live in large colonies that can include up to 80 animals. The northern viscacha is not a territorial animal, but colonies tend to be separated from one another by some distance.

Northern viscachas look a little like a cross between a squirrel and a rabbit. They have large ears for their bodies, soft, thick fur, and a bushy curled tail. Northern viscachas that live at lower elevations are typically gray in color, while those living up higher tend to be brown. The fur on their lower body is lighter than their upper parts and can be white, pale gray or yellow. The ends of their long tails are darker than the rest of the northern viscacha's body, usually rust or black in color.

The rocky territory that the northern viscacha lives in has sparse vegetation, so the little herbivore feeds on the hardy grasses that can survive in this somewhat harsh environment. It also dines on lichens and mosses. Northern viscachas typically feed in the evenings and early nighttime hours. Their daytime hours are usually spent basking in the sun on rocks.

The northern viscacha is a mainstay of the Andean cat's diet. It is also hunted by humans for food.

The northern viscacha is currently listed on the IUCN Red List as a species of least concern. It is believed to be a widely distributed species with a healthy population.

Picture of the northern viscacha by Alex Lee, licensed under the Creative Commons Attribution 2.0 Generic license.

The Northern viscacha is listed as Least Concern (LR/lc), lowest risk. Does not qualify for a more at risk category. Widespread and abundant taxa are included in this category, on the IUCN Red List of Threatened Species

Some facts about the
Peruvian mountain viscacha