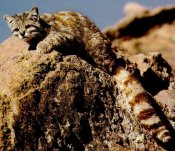 As early as 1865, the Andean Mountain Cat (Oreailurus jacobita) had been described to the scientific world, but it was only sometime in the 1980s that a real sighting happened. A couple of experts photographed it for a mere 2 hours, and these observations formed the bulk (if not the totality at that time) of data regarding their habits. Way back in '99, another set of photos were acquired by a biologist.

The Andean Mountain Cats have a very confined distribution, they are in arid grounds at Northern Chile and parts of Argentina. They could also be found in South Peru and Southwest Bolivia, but that's about it. Let me be more specific, in terms of their habitat, they only stay in rocky, arid territories, shrubberies and grass areas where rock piles abound. Harsh climate would not necessarily kill them, and as such, we could call them survivors in their own right. Freezing weather, intense heat, thermal condition changes, low precipitation...all these they could survive on...

No specific food of the Andean Mountain Cat is known, or rather, proved. As such, the experts have just been speculating, and what have they come up with? They said that the Andean Mountain cat most likely eats viscachas and chinchillas. Other food for them could be small birds and even lizards. Logic dictates that they would also consume insects and the never-absent rodents. Fact is, they have been labelled as "endangered".

It is a small but strongly-built animal, it has long fur mixed with red marks. It has a long tail, with seven dark rings on it.

Due to the status of these cats, the Andean Cat Alliance, Alianza Gato Andino (AGA) came into being. They work for the protection of these animals in ALL range nations.

The Andean cat, mountain cat is listed as Endangered (EN), considered to be facing a very high risk of extinction in the wild, on the IUCN Red List of Threatened Species

Namings for the Andean cat

A young / baby of a Andean cat is called a 'kitten'. The females are called 'queen' and males 'tom '. A Andean cat group is called a 'clowder, clutter, pounce, kindle (young), embarrassment (young),'.