Patagonian Mara - A Little Bit of Everything 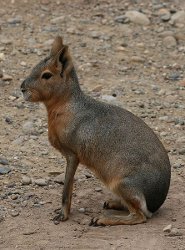 The Patagonian Mara (Dolichotis patagonum) lives in south and central Argentina mainly in areas of scrub desert or coarse grassland. It is a rodent resembling a short eared hare also called the Patagonian hare or Patagonian cavy but is actually a close relative of the guinea pig. It is one of the few rodents that mate for life, and its social structure is based on this. Pairs will travel everywhere together with the female in the lead and the male watching out for danger.

They usually keep to themselves except during breeding time. At that time they will share a burrow with other families with litters. The burrows are dug by the females. The pups are born well developed with open eyes. The female will identify her young by smell and lead them a little distance from the burrow to suckle. The male watches over the family at this time for predators. This unique social organization is thought to give more protection to the young. They live up to 10 to 15 years.

The third largest rodent in the world, the Patagonian Mara is 69 - 75 cm (about 2 feet) long. It can run very fast for its size, up to 45 kilometers (28 miles) per hour for distances over 1 kilometer, because it has powerful hind legs. The front legs are adapted for digging their burrows with four sharp claws. When fully grown they stand about 2 feet (.61 meters) at the shoulder, are 2.5 feet (.76 of a meter) long and weigh 35 pounds (15.88 kilograms).

The Patagonian Mara is gradually heading for the endangered species list. Its habitat is being cleared for agriculture and it is in competition for the green vegetation it eats with sheep and the European hare that have been introduced to the region. It is hunted by birds of prey, snakes and some mammals. Some localized populations have already become extinct. It is living in at least 12 protected areas at the present time. It is classified NT (near threatened) on the IUCN Red List.

This mammal seems to be a strange combination of several animals. They are fast runners like rabbits, and they can hop 6 feet into the air when startled. They walk like deer, and have some of the same coloring of deer or antelope with white on their underside and tail. They fold their front paws like a cat when resting in the sun. Their face resembles a kangaroo.

Picture of the Patagonian mara by Luis Argerich, licensed under the Creative Commons Attribution 2.0 Generic license.

The Patagonian cavy, patagonian hare, patagonian mara is listed as Near Threatened (LR/nt), is close to qualifying for or is likely to qualify for a threatened category in the near future, on the IUCN Red List of Threatened Species

Some facts about the
Patagonian cavy