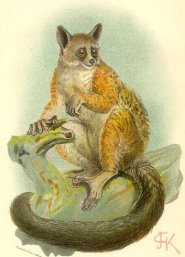 A male would mate with a large number of females and this results to a fierce competition. These primates have very expressive faces. Under danger, one would have eyes wide open, the lips apart, the teeth hidden by the lips, all in an attempt to scare a predator. A Bioko Allen's Bushbaby would talk to each other by what is called "urine washing", and what is this exactly? One would wash the hands/feet with urine, then rub it off to another thing. Lifespan-wise, the average would fall to a decade.

A long time back, they were exported to be pets in huge numbers as they are very cute, but at present, they are now shielded by Washington Convention. Right now, if you want to get a Bioko Allen's Bushbaby in the United States from outside of the US, you'll be faced with hardships.

The Allen's bushbaby, allen's galago, allen's squirrel galago is listed as Near Threatened (LR/nt), is close to qualifying for or is likely to qualify for a threatened category in the near future, on the IUCN Red List of Threatened Species

Some facts about the
Allen's squirrel galago