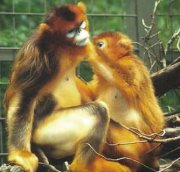 They have black shoulders, back, arms, head and tail, but the back of the Golden Snub-nosed Monkey (Pygathrix roxellana) is adorned with a long covering of silver hairs, and for the male, the side of the head, the forehead, neck parts are bright golden, hence the name of these monkeys. The female Golden Snub-nosed Monkey looks like the males, but the upper parts and head are more of the black side. Noses of Golden Snub-nosed Monkeys are flat and established back from their muzzles. They are capable of giving out a set of sounds, often with the absence of facial expressions. In the wild, chorus-like vocalizations often happen.

They live in high forests, going to elevations of more or less 3,000m, but the Golden Snub-nosed Monkey goes down to lower territories during the winter season.

Studies done over the years (just recent) have educated the world on the behavioral and ecological aspects, but more research still needs to be accomplished. The Golden Snub-nosed Monkey is a social creature, forming groups of 20 to 30 during the harsh days of winter, and up to two hundred during summer. These groups would congregate further, forming bands reaching a number of 600. The family unit is made up of one male and on the average, 4 females. Of course, the newborns are included in there. During a moment of danger, they climb very fast up into the refuge of their trees...that is, assuming the predator is not a snake. (A snake could of course catch up with them, no matter how high the tree is).

The Golden Snub-nosed Monkey is capable of exhibiting mating inclination all throughout a year. A young comes out after a gestation of about seven months, and there had been occasions where 2 newborns were given life. Just like so many other kinds, the mother is the one tasked to the infant's rearing, but it is not impossible to find a male actually grooming the newborn.

The diet of these monkeys consists of firs, pine needles, but they could also survive on buds, bamboo shoots and even fruits, among others. One area which needs to be conclusively studied is the life expectancy, as of now, it is for all intents and purposed, unknown.

Interesting fact: A long time ago, the coat of these monkeys was thought of to defeat rheumatism, and only Manchurian officials were allowed to wear it.