The New England Cottontail - A Twin of the Eastern Cottontail 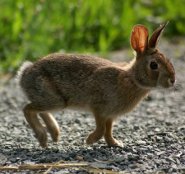 The New England Cottontail (Sylvilagus transitionalis) belongs to the cottontail rabbit family represented by dotted population in regions of New England, particularly from the southern parts of Maine to the southern parts of New York. This species is quite similar to Eastern Cottontail in appearance. It is not easy to differentiate between both the species only by their looks. In case of New England Cottontails, the upper part of the body is grey in color and the underside is white and it has a white tail. Different conservation steps are being taken to protect this vulnerable species, since its population has been decreasing alarmingly in recent years.

The New England Cottontail likes foraging alone and grooms all by itself only but not with others. It feeds on clover and grasses in summers but when the grass is not available, it thrives on twigs. Its home range is relatively small, about 2.5 acres (one hectare). Although males are small-built as compared to females, they have a larger home range than females. One litter consists of three to eight babies and the mother nurses its young ones only for sixteen days.

The New England Cottontail is normally found in young forests where the vegetation is thick and entangled. Since these forests have been reduced considerably, food and land resources of its habitat have become scarcer, which in turn, has affected its population to a great extent.

Previously, the New England Cottontail was extensively distributed in Vermont, New England, and southern New Hampshire, extending north to Rutland, southwest and eastern New York and southwestern Maine. The range where New England Cottontails are found is reducing considerably. Currently, this species has been restricted to mountain and boreal regions in the southwestern Maine, southern and central New Hampshire and perhaps in some parts of southern Vermont. There are chances of finding some population of this species in Massachusetts, northern parts of Rhode Island, New York, to the east of Hudson River, and Connecticut. Remnant populations of this species are actually restricted to five regions:

The New england cottontail is listed as Vulnerable (VU), considered to be facing a high risk of extinction in the wild, on the IUCN Red List of Threatened Species

Some facts about the
New England cottontail rabbit