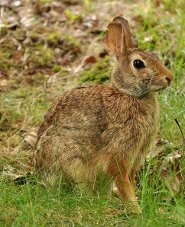 The Eastern Cottontail (Sylvilagus floridanus) is a mammal that lives in Canada, the United States, as well as down into South America. It generally prefers living in swamps, thickets and dense forests. The Eastern Cottontail is a very private animal and rarely comes out into open fields, preferring to live in brushy areas.

Adult Eastern Cottontails measure approximately 395 to 477 mm with an average of 430 mm (15.55 to 18.78 inches, average 16.93), while they weigh approximately .80-1.53 kg(1.76 to 3.37 pounds). Generally, the underside of the Eastern Cottontail is white while while the topside has a brown underfur with a longer, more coarse gray and black tipped that covers the back. Compared to other rabbits, it has particularly large eyes.

While the Eastern Cottontails are hard to see because they are quite private, they usually venture out more often in the evening and night hours. When they leave their homes during the night, it is usually to eat. They tend to eat mostly various green plants, grasses, bark from many different trees and other vegetarian foods, especially fruits and vegetables. They have been known to sneak into residential gardens and snack on the home-grown produce. The Eastern Cottontails are preferred by predators such as hawks, owls, coyotes, foxes, weasels, and eagles. Despite being preyed upon, the Eastern Cottontail move very quickly and can run up to 18 miles per hour and can jump between 10 and 15 feet (3 - 4.5 meters) to avoid becoming dinner. Despite their speed, the average life expectancy of an Eastern Cottontail is very short, lasting usually only one to three years.

The mating ritual of the Eastern Cottontail is quite entertaining if you can catch a glimpse of it. The ritual usually occurs after the sun has gone down for the night and involves the male chasing the female until she decides to turn and face him. At this point, she will slap at him with her front paws, they then crouch down and leap into the air prior to mating. Gestational age is approximately 25 to 28 days and the female usually has between 1 and 7 litters per year, with an average of 4. If you are ever near a brushy area after dark, be sure to check out these amazing animals.

The Eastern cottontail is listed as Least Concern (LR/lc), lowest risk. Does not qualify for a more at risk category. Widespread and abundant taxa are included in this category, on the IUCN Red List of Threatened Species

Some facts about the
Eastern cottontail