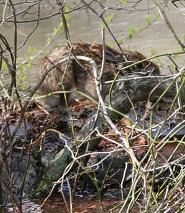 The swamp rabbit (Sylvilagus aquaticus) is quite similar to its cousin cottontails and is the largest member of the Sylvilagus genus. Generally, the color of its coat is brown and its short tail is white from underneath. Both the male and the female members of this species weigh about 1.5 to 2.7 kg (3 to 6 pounds). In most of the lagomorphs, the females are larger than their male counterparts.

The swamp rabbits most commonly feed on plants, grasses, and reeds. They are found in marshy lands. These rabbits construct their nests above the ground in little dens using dead plant material and the fur they shed. If a predator has been seen, then swamp rabbits can run as fast as 45 km per hour generally in vague zig-zag outlines.

These rabbits are found all over the south of Central America and on the coastal regions of Gulf. Mississippi, Louisiana and Alabama are the places where swamp rabbits are found in abundance. They are also found in some parts of Missouri, South Carolina, Oklahoma, Texas, Georgia, Tennessee, Illinois and Kansas.

The swamp rabbits prefer marshy lands, swampy lowlands, tributaries of big rivers, cypress swamps, and flood plains. They make their habitat close to water. They make shallow depressions in tall grasses, leaves or other materials which can provide a cover to rest during the daytime. They are nocturnal foraging animals.

The breeding season of swamp rabbit starts from mid February but it may occur throughout the year. The gestation period is about 35 to 40 days. The female gives birth to 2 or 3 litters per year and there are 1 to 6 individuals in one litter. After two or three weeks, the young ones become independent. Both the male and the female reach their sexual maturity when they are about 6 to 7 months old.

The swamp rabbit lives for one and half years (on an average) but it may live up to 10 years in the wild in favorable conditions.

These rabbits are most active when the climate is cool. They like to roost at dawn, dusk, or in the night since they are nocturnal animals. During the day, they take rest and remain motionless in large hollow tree logs or long and dense grass. Like cottontail rabbits, swamp rabbits run very fast if they sense any danger and leap in the water and remain still inside water with only their nose being above the water level.

The Swamp rabbit is listed as Least Concern (LR/lc), lowest risk. Does not qualify for a more at risk category. Widespread and abundant taxa are included in this category, on the IUCN Red List of Threatened Species

Namings for the swamp rabbit

A young / baby of a swamp rabbit is called a 'bunny, kit, kitten, leveret or nestling'. The females are called 'doe or jill' and males 'buck or jack'. A swamp rabbit group is called a 'warren, nest, colony, bevy, bury, drove or trace'.