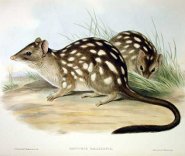 The Northern quoll (Dasyurus hallucatus) is a marsupial mammal that is native to Australia. It was found from southeast Queensland to the northern Western Australia, but is now manly in the Northern Territory's Top End and other areas north of Brisbane. It is a carnivore and eats reptiles, insects, small mammals and soft fruits. It is also a scavenger and seeks road-kill and garbage tins.

On the IUCN Red List of Threatened Species it is considered endangered. This is mainly because of the cane toad. Cane toads were introduced to Australia in 1935 to control a beetle in the sugar cane fields. They have spread right across Australia and where they flourish, the northern quoll declines. Northern Quolls have also declined because they are hunted by feral cats and because of the changed fire patterns.

Also known as the Northern Native Cat, the northern quoll lives mostly in rocky areas. They like eucalyptus forests that are within 150 km from the coast. The animals that live in the rocky areas tend to live longer than the ones that live on the savannas. They can climb well because of small spikes on their hind feet, but they mostly live on the ground. They are nocturnal, but are sometimes found in hollow logs, rock crevices, hollow trees and caves during the day.

The Northern Quoll has a brownish or dark grey body with white spots. It has a long furry tail like a cat and is a prodigious hunter and will consume anything that moves that is small enough for it to manage.

The Northern quoll is listed as Near Threatened (LR/nt), is close to qualifying for or is likely to qualify for a threatened category in the near future, on the IUCN Red List of Threatened Species

Some facts about the
Northern quoll