A long time ago, the habitat of the Western Quoll (Dasyurus geoffroii) was huge, it covered desert areas of Central Australia, but that was then. At present, their turf had been significantly cut down to what is known as the Jarrah forests (see picture below). How do the Western Quolls look like: an average of 1.3 kg, they ordinarily have a black/brown coat featured with white areas. The Western Quoll has a short-legged structure, a pale face, big eyes and ears which we could only think of as rounded.

Their breeding (reproduction) comes from May to July, where June could be considered as the "heaviest" period. They have a gestation time frame of sixteen to twenty-three days, and a newborn would stay at the mother's pouch for 7-15 weeks, until the time that the newborn Western Quoll could manage to stay out of the said container. These Quolls (both sexes) are considered as sexually capable at just 1 year old.

They are nocturnal creatures. The abode of male Western Quolls are big and cross the areas of females, still, they actually only meet when they need to mate. A Western Quoll can climb tress, and they stay in dens which were built by other creatures.

What exactly does a Western Quoll eat? Well, it encompasses a lot: big insects, vertebrates, carrion even.

If we speak of human-settled places, they are capable of raiding chicken cages. When it is in a forested locus, they eat reptiles, parrot-sized birds and crustaceans.

A great fraction of their habitat has been eradicated by constant burning and pesticide-application by the farmers, but that is just one reason. Foxes and deadly cats have cut down their population to what it is right now.

Interesting fact: A Western Quoll is capable of killing bigger prey by a bite to the back of its head. 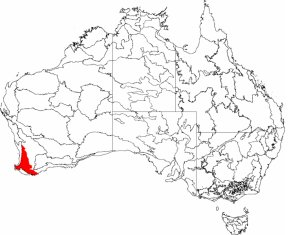 Map of Australia, highlighted is the Jarrah forest, by Hesperian, licensed under GFDL

Picture of the Western Quoll by Nezumi Dumousseau, licensed under Attribution 2.5 License

The Chuditch, western quoll is listed as Vulnerable (VU), considered to be facing a high risk of extinction in the wild, on the IUCN Red List of Threatened Species

Some facts about the
Western quoll