The Southern Long-nosed Bat - bat without a tail 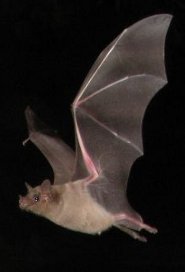 The Southern Long-nosed Bat (Leptonycteris curasoae) is unique in that it has no tail that is noticeable. Most other bats have a distinct tail. It is also called the Lesser Long Nosed Bat, and it flies from Mexico to Arizona and New Mexico at springtime and a return trip to Mexico in the fall. They are one of the bat types that are migratory, following the flowering seasons of their favorite desert plants. They are listed as endangered species by the U.S. Most of the migration flight path covers federally protected lands, so their most frequented habitats offer them some safety. Conservation of their desert food supply is critical to their survival as a species.

The body is tan, but the wings are much darker, in a true bat configuration with wing spines connecting the webbed parts of the wings. Their size is smaller than other varieties of bats, with a length of up to three inches. In overall appearance, they resemble flying mice. They dine on the pollen, nectar, and fruit of the saguaro, organ pipe and other cacti.Their tongues are brushy textured, ideal for gathering pollen quickly from a fly-by of a showy cactus flower. Their snouts are, as their name reflects, elongated and well designed for the method of food collection they use. They are small eared and have less teeth than other bat species. The females typically have single births and spend the pregnancy period of about six months in caves with thousands of other pregnant friends. The males do not congregate in numbers as large as the females, and tend to group only randomly, preferring to fly solo.

Many people unknowingly view all bats as of the vampire variety and think that they all seek blood. This is not the case with the southern long nosed bat. The old myth of bats flying in your hair and getting tangled in it is simply that, a myth. Most often, they are aiming to grab gnats or mosquitoes that are close to your body or head while in flight and accidentally get too close and get involved with hair. That is entirely accidental. The southern long nosed bat is so small that as it darts in to suck pollen, it might even be mistaken for a hummingbird but for the webbed wings. At times it has been spotted sipping from the hummingbird feeders that people hang in their yards or patios.

The Southern long-nosed bat is listed as Vulnerable (VU), considered to be facing a high risk of extinction in the wild, on the IUCN Red List of Threatened Species

Namings for the southern longnosed bat