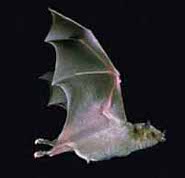 The Mexican Long-nose Bat (Leptonycteris nivalis) is also known as the Greater Long-nosed Bat. Compared to America's other bat species, the Mexican Long-nosed Bat is quite large. Its total length is about 5.5-7.5 cm (2.75-3.75 inches). It is generally dark grey but some of them have a 'sooty' brown color. There is a prominent leaf on the end of its long muzzle. The long tongue of the Mexican long-nose Bat helps it to feed on the flower nectar. It can extend its tongue up to three inches and there are hair-like papillae on the tip of its tongue. It has a very minute tail which is not very visible from a distance.

The movement patterns of Mexican Long-nosed Bats are not well-known, it is seen that each year, they move from Central Mexico to Northern Mexico and some part of their population reaches New Mexico and Texas after crossing the borders.

The female bat gives birth to its young ones during summer season in Mexico and then, the babies fly with their mothers towards north. It is believed that the female gives birth to only one or two young ones each year. It is also thought that the mother recognizes its offspring from the combination of the young one's smell and sound. The mother nurses her babies for one month and the babies become capable of flying at the age of five months.

Very few males are seen in Northern Mexico and Texas which means that they segregate from females and are rarely seen in areas of female ranges. In winter, they congregate again to copulate in caves near Central Mexico.

Since these bats mainly feed on nectar, they emerge at night in search of plants with showy flowers such as century and agaves plants. Along with nectar, the bat also swallows pollen which is picked up on its fur while it feeds and later, consumes it during grooming. In mid-May, these bats migrate to places where there are large numbers of cacti and agaves species for nectar and protein-rich pollen.

These Long-nose Bats are found at cooler and higher places in Texas, parts of New Mexico, and Mexico. The northern parts of Mexico are their main habitats along with which they are also found in scrub vegetations of certain deserts where agaves, mesquite, several cacti and creosotebush are found in plenty. These bats are also found in Big Bend National Park where five different vegetations are found at different elevations. The long-nosed bat was first discovered in The Big Bend National Park in a cave in US in 1937.

Although this species occurs in most parts of Mexico, indications show that its population is on a substantial decline. It has been found that in a discarded mine near Nuevo Leon, a population of 10,000 Mexican Long-nosed Bats was recorded in 1938, but in 1983, there were no signs of this species. In another cave, in the same area, the ceiling used to be covered with long-nosed bats in 1967 but in 1983 only one bat was recorded. It is thought that the decline can be due to the loss of food sources and roosting sites.

The Greater long-nosed bat, mexican long-nosed bat is listed as Endangered (EN), considered to be facing a very high risk of extinction in the wild, on the IUCN Red List of Threatened Species

Namings for the Mexican longnosed bat