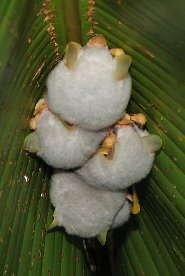 The Honduran White Bat (Ectophylla alba) is a bat that has – like its name suggests – snow white to grayish fur, along with an amber or yellow nose and ears. They are a near-threatened species of bat and are up for re-evaluation in the near future under the new standards of the IUCN. This bat, along with the "ghost bat" is one of the only two currently known species of bat that is white. Most others are a variant of brown, tan, or might have white markings in the case of the recently discovered Stripe-Faced Fruit Bat. The bats are rather small in size, measuring at just 1-2 inches (3-5 cm) in length and the weight is less than an ounce at .2 (6 grams). It lives in Central America in dense thickets of the rainforests or abandoned banana fields (called groves). They are also known to roost inside abandoned buildings and hollow trees on occasion. They feed mostly on fruit, and they give birth in the spring to just one offspring.

The Honduran White Bat is unique among most bats (but not many tropical bats) in that it will modify its immediate surroundings for its own benefit. Unlike the misconception that all bats live in caves, this bat will use the leave of the large heliconia plant to form a tent. It does so by cutting the side veins of the plant that extend out from the midrib; this causes the leaf to droop along the stem, making a tent. The little white bats then cling to the inner plant upside-down in small colonies of around six, although larger groupings have been reported. Unlike most bats that do make tents – the Honduran White Bat will not flee if disturbed lightly by looking under the leaf – they will only flee when the stem itself is disturbed causing a brief flurry of activity. The advantage of having their white fur is postulated to be the reason – as when sunlight filters through the leaf they look green, and so by not moving they will go un-noticed by possible predators from below.

The Binomial Name of the Honduran White Bat is Ectophylla alba. Its genus is Ectophylla of which it may be the only member. Ectophylla belongs to the Subfamily Stenodermatinae of which many other bats are a part, such as the Red Fruit Bat, the Neotropical Fruit Bat, and many more (please note that these fruit bats are not in the same family as the Flying Foxes which are the large fruit bats that belong to the Suborder Megachiroptera). Stenodermatinae belongs to the family Phyllostomidae, which are also known as the leaf-nosed bats; well known members include all sorts of insectivores, frugivores, full-fledged vertebra eating predators, and the three species of bat which feed solely on the blood of other animals. Phyllostomidae belongs to the Superfamily Noctilionoidea, which contains the Fisherman Bats, Ghost-Faced bats, and short-tailed bats. Noctilionoidea belongs to the Suborder Microchiroptera, otherwise known as the microbats. Microchiroptera use echolocation to find their way about in the dark, they lack under-fur, and they feed primarily on insects – with the exceptions of the various families that feed on fruit, other animals, or blood. Microchiroptera belongs to the Order Chiroptera of which the Megabats are members (megabats lack echolocation with the exception of one single species, and feed primarily on fruit, they are also the largest bats alive). Chiroptera belongs to the Superorder Laurasiatheria of which we Homo sapiens sapiens are members, along with all the ungulates, carnivores, anteaters, and whales (and more). Laurasiatheria belongs to the Infraclass Eutheria, of which all placental mammals are members. Eutheria belongs to the Subclass Theria, of which the marsupials are members – but the monotremes are not, and this all belongs to the Class Mammalia.

The Honduran White Bat is known for its white fur, unique among bats as it is only one of two species to have this coloration.

Picture of the Honduran white bat by Leyo, licensed under GFDL

The White bat is listed as Near Threatened (LR/nt), is close to qualifying for or is likely to qualify for a threatened category in the near future, on the IUCN Red List of Threatened Species

Namings for the white bat