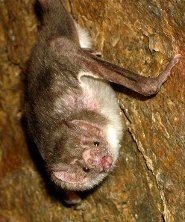 Vampire bats are in the subfamily Desmondontinae, as there are three different species alive today; they are the Common Vampire bat (Desmodus rotundus), the Hairy-legged Vampire Bat (Diphylla ecaudata), and finally the White-winged Vampire Bat (Diaemus youngi). Each species has their own unique differences but are closely related, as they all are able to metabolize and break down blood (the eating of blood is called hematophagy), and they also have adaptations like thermoreceptors on their noses so that they can find mammals to feed on. Contrary to popular belief, they do not have venom nor are they specifically man hunters, but instead prefer the blood of large mammals like livestock. That is not to say that they do not occasionally use human blood, but they do not have fangs to suck blood out with. Instead they create a wound, and their saliva has an anti-coagulation property which allows the blood to flow freely, enabling them to lap it up into their stomachs or suck it up with specialized groves in their mouths on their tongues. They also do not make high pitch screams, but rather low pitch vocalizations which they use to communicate, and this is similar to the distantly related Fruit Bat (megabats) which also uses low pitch sound rather than high pitches.

The Hairy-legged vampire bat is a small bat that is around the same size as the Common Vampire Bat. It is adapted to mainly feed upon avian blood, rather than mammalian blood, and it is found in South America, and can be found resting with fellow bats. Usually found in small numbers, there have been larger colonies reported, but none bigger than 35 and can also be found co-habitating caves with the Common Vampire Bat. Within this species there are two regionally separated subspecies, one being the Diphylla ecaudata centralis which is in Mexico down to Panama, and Diphylla ecaudata ecaudata, which is found from Peru to Brazil and also eastern Panama.

The Common Vampire Bat (Desmodus rotundus) has a burnt amber fur on their backs while also a lighter brown on their bellies and measure around three and a half inches long (9 centimeters) and posses a wingspan of roughly a half foot or more - upward of seven inches (18 centimeters). They're very light (a whopping 2 ounces [57 grams]). This species has an advantage of a groove in their mouth which allows for sucking like a straw down the middle of the tongue, which is not present in the Hairy-legged vampire bat.

The White-winged Vampire Bat (Diaemus youngi) can sometimes be found in the same places as the Common Vampire Bat, and are known to feed on birds, rather than large mammals. They get their name from the white tips of their wings, while their color is close to that of the Common Vampire Bat if not a tad lighter and in the blond range. This species of bat does not jump on takeoff like the Common Vampire, nor does it hop around or run like the Vampire. However it possesses a unique advantage in that within its mouth is a pair of specialized glands that will emit a hissing, or putrid liquid and create a strongly offensive smell, possibly for defensive means. It is likely because of this defensive mechanism that they are more docile than the Common Vampire bat and easier to handle – they are also more vocal.

All three species of bat are located in the Desmodontinae Subfamily of the Family Phyllostomidae, which are all of the New World bats with leaf-nosed appearances. This Family is a part of the Suborder Microchiroptera, which are the microbats. However recent genetic studies may change the way bats are ordered, and furthermore change the order of the orders and suborders – however the currently recognized standard will be used for this. Microchiroptera belongs to the order Chiroptera, of which all bats are members. This order belongs to the Superorder Laurasiatheria, of which the hedgehogs, shrews, whales, anteaters, carnivores, and ungulates are a part of. Laurasiatheria in turn belongs to Eutheria, or all the placental mammals and their extinct ancestors – of which we are of course a member. In turn Eutheria belongs to the Subclass Theria of which all mammals except for the monotremes are members, and all mammals belong to the class Mammalia.

The behavior of Vampire Bats is to be communal and supportive, where if one bat fails to feed, another bat will share its food with it and increase the overall survival chances of the small colonies. They can often be found cohabitating but there is no interbreeding. They are all capable of remembering past meals and often revisit livestock that they have marked, as most of the time the livestock travels very little distance. Their numbers have been increasing, as before mankind began having larger land mammals they mostly fed on what could be found, from opossums to snakes and new world monkeys, and especially birds.

Interesting Facts about the Vampire Bats

The Common vampire bat, vampire bat is listed as Least Concern (LR/lc), lowest risk. Does not qualify for a more at risk category. Widespread and abundant taxa are included in this category, on the IUCN Red List of Threatened Species

Namings for the vampire bat

Some facts about the
Vampire bat