The Finless Porpoise - Celebrity of the Sea 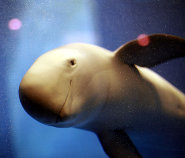 The Finless Porpoise (Neophocaena phocaenoides) can be found swimming in the warm coastal and estuary waters of temperate and tropical Asia. Marked by its lack of a dorsal fin, this playful but shy mammal instead sports a ridge that extends between the blowhole and the tail flukes.

With a sleek round head and pink eyes (on about half the population), this joyful marine species is more difficult to spot than their human-friendly dolphin cousins. They don't seek out people, or like to surf on the bow waves of ships as the daredevil dolphins do. Though some have been seen performing "tail stands" and doing "spy hops" - quickly poking their heads out of the water just past the eyes, and disappearing into the water again.

They live in small groups of about five to ten porpoises, called schools, or pods. However larger groups of twenty-five have been seen. Little is known about the size of the entire population of this elusive, yet beautiful creature. Shy of humans, and occupying an ever-diminishing natural habitat, the finless porpoise exhibits evasiveness around oceangoing vessels and other human activity. Because of this, it is difficult to gather enough data to understand the total population of this marine mammal.

Born at about 75 cm, they can reach up to 170 cm (5.6 feet) and 70 kg (154 lbs). Some have been seen as long as 200 cm (6.6 feet) and weighing 100 kg (220 lbs). They are colored dark gray to whitish on their underbelly. They live to be about ten to twenty years old. They usually feed on fish, crustaceans, shrimp and small squid. They use echolocation to navigate the warmer waters of their habitats.

As for natural predators, it seems they are most threatened by human activity. While sharks have been known to attack porpoises, in general they leave them alone. Similar to the beluga whale in appearance, the finless porpoise cuts a unique profile with its sleek and graceful lines, and photogenic smile.

Found in the coastal waters off of Asia, Pakistan India, China and Japan, Indonesia, Thailand, and many more countries, this curious species, though widespread, is not necessarily everywhere. Because of their shyness they are hard to track. Human activities such as fishing and damming rivers also diminishes their numbers. Although they are not fished for directly, they do get tangled in nets such as gill nets, and succumb to electric fishing practices in China's Yangtze River; an illegal practice that also decimates the porpoise's food supply. Finally, pollution continues to threaten the shallow waters where these creatures call home.

The finless porpoise has been placed on the IUCN Red List of Threatened Species. Because little is known about the total population, they are classified as data deficient; and population decrease has been inferred, in the presence of factors such as bycatch, decline in the quality of natural habitats, pollution and mortality in fisheries.

This incredible, shy, fun-loving creature of the sea smiles and swims off into its mysteries, but hopefully, not into history.

Namings for the finless porpoise

Some facts about the
Finless porpoise