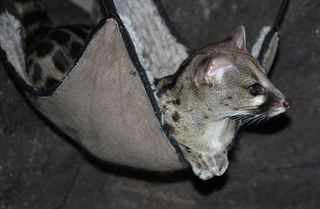 The Blotched genet, cape large-spotted genet, large-spotted genet is listed as Least Concern (LR/lc), lowest risk. Does not qualify for a more at risk category. Widespread and abundant taxa are included in this category, on the IUCN Red List of Threatened Species

Some facts about the
Large-spotted genet

Facts about the large-spotted genet

Physical Appearance The large spotted genet is siimilar to the common genet in appearance.

The Large-Spotted Genet is distributed in South Africa from the southern and eastern coast, KwaZulu-Natal, Mpumalanga, Northern Province and extending into neighbouring countries.

The Large Spotted Genet (Genetta tigrina) is a cat-like, nocturnal member of the same Viverridae family as mongooses and thus quite a close cousin to Gus. (Full text)