The Haussa Genet - Africa's Father of a New Domestic Cat 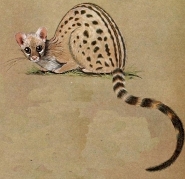 The Haussa Genet (Genetta thierryi) is a small cat-like animal indigenous to West Africa. It is in the Vieridae family along with civets and fossas. They are considered rare, because of the few countries in which they are found. They prefer the moist to dry savannahs and woodlands, but have been found in the rainforest. The Haussa Genet is light brown in color with rusty to black spots on the body and stripes down the back. Genets have an elongated face with big triangular ears, and big eyes. The legs are short and the tail is as long as the body and banded with dark rings. The muzzle is black and the area around the eyes and mouth are white. There are nine species of genets and while all have similar markings and spotting, the body color may vary from light brown to grayish-brown. These species also vary in size from 13 inches (33 cm) to 33 inches (84 cm) and in weight from 4.1 pounds (1.9 kg) to 40 pounds (18 kg). The Haussa Genet has been described as being in the smaller to medium weight and size range.

The Haussa Genet is a solitary animal that spends the day in a burrow, hollow tree, or rocky den and spends the night foraging for food. The diet of the genet consists of birds, mice, other small mammals, snakes, lizards, insects, eggs, fish, roots, and fruit. They are arboreal and terestial. They have excellent vision and hearing and are very fast runners.. It has the ability to make the hair on the back stand up when it is frightened, and it can purr softly when it is happy. The paw has five toes with semi-retractable claws. The genet has a gestation period of 78 days and the young are called kits. The mother nurses the kits for about 62 days. They are considered mature at two years of age. The females usually has two litters per year and 2-4 kits per litter, dependent on the size of the females. The Haussa Genet is considered of "Least concern" on the Red List of Threatened Species. Their biggest threat comes from man as they are captured and sold for pets and in some areas they are sold for their meat and pelts.

These little animals are much like ferrets as they are very playful and curious. They have been kept as pets in many countries for centuries. Recently in the United States, genets have been used in cross-breeding with domestic breeds of cats to make beautiful multi-colored spotted cats. The new hybrid cats, including Bengals and Savannahs, have been sold as pets in America since 2006. These cats have the markings of the genet, and the behavior of the domestic cat.

The Haussa genet is listed as Least Concern (LR/lc), lowest risk. Does not qualify for a more at risk category. Widespread and abundant taxa are included in this category, on the IUCN Red List of Threatened Species