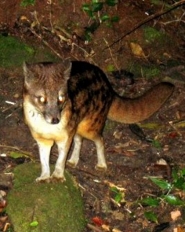 The Malagasy civet (Fossa fossana) is also called the striped civet. It used to be thought of as the banded palm civet (Hemigalus derbyanus), but recently biologists discovered that the Malagasy civet was a separate species. Although civets look like a cross between a domestic tabby cat and a fox, they are their own distinctive type of mammal. It’s not to be confused with the fossa (Cryptoprocta ferox), which is related to the mongoose. Taxonomists may soon rename the Malagasy civet in order to keep it from being confused with a fossa.

Malagasy civets are found only on the island of Madagascar, home to a wide variety of unique mammals found no where else on Earth. Although the Malagasy civet is currently not threatened with extinction, it depends on the evergreen forests in order to survive. If the forests of Madagascar disappear, so will countless animals, including the Malagasy civet. It is also hunted by humans and facing stiff competition for food and dwelling places from the small Indian civet, an invasive species.

The Malagasy civet walks and stalks its prey like a fox, but has a face that appears to be an elongated domestic cat’s face. It has shorter legs than a fox and carries its body close to the ground. Both male and female have a light tan and grey coat with tabby cat like black markings on its short but thick fur. There are no markings on the head. The nose is black. The tail is faintly ringed and appears bushy like an angry cat’s tail.

Little is known about the life of the Malagasy civet. It is known that males and females form strong pair bonds. Females give birth to only one baby at a time after a three-month gestation. This is a long gestation for such a small mammal, so the baby is furred and mobile within 72 hours after birth. Both males and females take care of the baby.

Malagasy civets sleep through the day in burrows made from hollow tree trunks or gaps in rocks. At night, they wander their territory searching for prey – frogs, insects, small birds and rodents. They store fat in their tails to help survive times when prey is hard to find.

Picture of the malagasy civet by Ettore Balocchi, licensed under the Creative Commons Attribution-Share Alike 3.0 Unported and GFDL

The Fanaloka, malagasy civet, striped civet is listed as Vulnerable (VU), considered to be facing a high risk of extinction in the wild, on the IUCN Red List of Threatened Species

Some facts about the
Malagasy civet