Brown bear - The giants of tundra and mountains 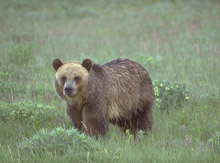 Who doesn't know the brown giants - probably the best-known of all bears? The Brown bear (Ursus arctos) can be found on coats of arms as well as on flags. And even in the naming of large cities like Berlin or Bern it played an important role. In former times the relationship between bears and humans was dominated by a kind of timorous admiration. This changed with the invention of firearms, which made it possible to hunt for bears at a relativly low risk. From that times on the large bear was just an unpleasant and dangerous competitor one had to get rid of. This attitude towards bears is very common even up until now. Of course there is a certain danger coming from a large Brown bear, but under normal conditions bear attacks on humans are quite rare. Normally bears try to get out of humans' ways. Just if a certain attack distance is reached - mostly by man - there might be a bear attack. Such accidents are normally due to lack of knowledge about bears or simply thoughtlessness.

The Brown bear is closely related to the Polar bear (Ursus maritimus), inhabiting the northern polar regions, the North American black bear (Ursus americanus) and the Asian black bear (Ursus thibetanus). But no other bear species and hardly any other animal shows such a wide variability as the Brown bear does. Brown bears are distributed holarctic, i.e. on the entire northern hemisphere. Because of this wide distribution there are many subspecies, which split off during the phylogenetic development of the Brown bear. The smallest Brown bears inhabit the Alps and are not much larger than a Saint Bernard dog. Brown bears inhabiting Kodiak island near Alaska, the so called Kodiak bears, however reach lengths up to three metres and weights of almost 800 kg. The North American Grizzly and the East Siberian Kamchatka bear are real giants among the Brown bears too. But there is not just a wide variability concerning the size of Brown bears, they also differ widely in fur colour: There are "blonde" bears as well as bears with almost black fur.

Although Brown bears are taxonomically placed in the group "carnivores" they are typical omnivores concerning their diet. The major part of their food is of vegetarian origin. During spring Brown bears graze like cattle due to lack of better food. But if available Brown bears prefer food with a higher energy content. Very popular are ripe berries and fruits in autumn. At that time they stuff themselves to get through the near hibernation. But Brown bears don't reject animal food either, of course. It ranges from insects and ground breeding birds to small rodents and hoofed animals of all sizes. Carrion isn't spurned either by Brown bears. Such a broad culinary interest often results in conflicts with humans; the left-overs of human meals are very interesting to Brown bears. They often can be found near human settlements searching for left-overs among the waste. The tendency to show such a behaviour increases according to the increase of the intersection of human and bear habitats.

Brown bears inhabit mountain regions and arctic tundra, landscapes where trees are scarce or not present at all. But they prefer regions where they find trees here and there, because trees may serve as a refuge for young bears. They are always in danger of being killed and eaten by adult male bears. But young bears are very skilled climbers and manage to reach thin branches, that can't be climbed by adult bears without the risk of falling down. As a result of that threat of their young by adult male bears, bear mothers tend to react very aggressively and defend their young with vehemence against the much larger and heavier males.

The regions inhabited by Brown bears don't offer enough food for the large animals during winter. Brown bears face that problem by hibernating. After they enlarged their fat reserves during autumn by eating berries, fruits and other food of high energy content, they retire to caves, which they mostly dig into slopes. Here they stay until next year's spring. Bears reduce their metabolism during that time. Their body temperature is lower too, although bears don't reduce it to the very low values of small hibernating mammals like Edible dormouses for example. Those animals keep their body temperature only a few degrees above the ambient temperature, unless it reaches a critical point. But it would be absolutely impossible for an animal of the size of a Brown bear to heat up its large body in spring again for more than one or two degrees.

Young Brown bears are born during winter inside the cave. In most cases bear mothers give birth to twins, but all litter sizes between one and five are possible. The newborn bears are naked, blind and not larger than rats. Their mother keeps them warm by holding them between her body and her arms. At the time when the family leaves the cave the pups are well developped and follow their mother wherever she goes. Depending on the subspecies the families stay together for 2,5 years or even longer.

The largest stocks of Brown bears inhabit the Asian part of Russia nowadays. In North America Brown bears have been pushed back more and more towards the northern regions. In former times they also inhabited the southern parts of the USA and Mexico. The conflict between bears and humans lead to their disappearance in most parts of Europe too. Quite large and stable populations can only be found in Eastern Europe and Scandinavia nowadays. In other European regions some Brown bears were able to survive in national parks and reserves. But Brown bears from Eastern Europe start occupying their former habitats in the Alps again. Some Brown bears have been sighted in Austria recently.

Brown bears have been a part of the livestock of zoos as well as of small animal parks for a long time. They serve as crowd-pullers in circuses and as dancing bears even nowadays. In most cases they are kept under extremely bad conditions. Brown bears are regarded as undemanding and adaptable and are often kept in far too small cages for that reason. The intelligent bears don't find much stuff to occupy themselves with in such cages and get neurotic very soon. In Germany the "Alternativer Barenpark" in Worbis cares for bears, which have been kept under bad conditions. Here the animals inhabit a large area with natural surroundings. Unfortunately the list of bears searching for better conditions is very long. One can only hope that more animal parks and zoos start building new and better enclosures for their bears. This is actually happening in some parks now and hopefully small bear cages will be a thing of the past soon.

This article was originally published at http://magazine.naturspot.de, Link to the original article

The Brown bear, grizzly bear is listed as Least Concern (LR/lc), lowest risk. Does not qualify for a more at risk category. Widespread and abundant taxa are included in this category, on the IUCN Red List of Threatened Species

Namings for the brown bear

Some facts about the
Brown bear and grizzly bear