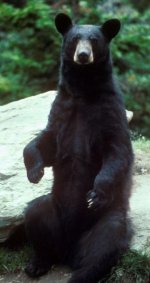 The American Black Bear (Ursus americanus) exists in various places: Canada, from Atlantic to Pacific, and 40 states of the US. There were probably around 2 million of these bears prior to European colonization, but their numbers drastically went down to 200,000, coming from the destruction of their habitat.

The female American Black Bear weighs from 40 to 180 kg, while the males from 114 all the way to 274 kgs. Those are the norm, but it has been known that a male could go up to 365kgs, but that would be a very rare occurrence. Adult American Black Bears have round ears, small eyes and a long snout. Usually, they would have shaggy covering, but the color would differ: there are brown, black and even blonde. They could stand/walk using the hind legs, but usually, they move on all fours. The shuffling walk we are so familiar with comes from the fact that the hind legs are a bit longer than the front ones.

The typical American Black Bear of Canada opts to stay in forested areas, wet hardwood and forests (conifer kind). They sometimes go through hibernation in winter and to take refuge, would build their homes in tree holes, banks, and even under logs. For the mountain areas, they would opt for lower elevations in the search for food, and they would relocate to northerly slopes (higher ground) when summer sets in. These bears actually climb the trees if under threat, and they use the forest as travel paths.

The mating is usually done in summer, June to middle of August, with some variations in some cases. Cubs are tiny, born hairless and blind. The average is 2-3 cubs for a birth, but a number of five is not impossible. In times where a parent (female) senses any kind of threat, she would grunt as a warning to the cubs, and they would then climb up (a tree)...actually, the survival of the young depends on the parent's skills in teaching. Teaching in terms of eating, where to take refuge, and when to anticipate dangers.

The concept that these bears are inclined to kill/harm humans without provocation is probably a gross exaggeration. Estimate-wise, there have been ONLY fifty-six cases of humans (being killed) in North America, for the past century.

The American black bear is listed as Least Concern (LR/lc), lowest risk. Does not qualify for a more at risk category. Widespread and abundant taxa are included in this category, on the IUCN Red List of Threatened Species

Namings for the American black bear

Some facts about the
American black bear