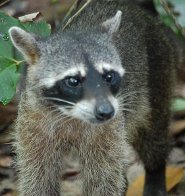 The Crab-Eating Raccoon (Procyon cancrivorus) is smoother and lighter than its northern cousins. The males of this species are polygynous, which means they mate with several females from July to September of each year. The females, however, will not allow another male to mate with them after they have become pregnant. This leaves the males free to seek out other partners for the rest of the season. North American raccoons mate from January to June when the weather is rather cold. Their options for partners are somewhat more limited in this environment. So, Procyron cancrivorus is not only more attractive than Procyon lotor; he also gets a more exciting lifestyle in much better weather. This is why the Crab-Eating Raccoon could be nicknamed the sleek South American playboy of the raccoon world.

Crab-Eating Raccoons inhabit central and south America. They prefer to live near bodies of water in parts of Argentina, Paraguay, Uruguay, and Costa Rica. Procyon cancrivorus does seem to prefer marshy and swampy inland rivers. The Crab-Eating Raccoon can make use of just about any habitat, though, as long as there are adequate opportunities to find food, water, and shelter.

Interestingly, the Crab-Eating Raccoon usually seems to prefer to eat fruit. Of course, like all raccoons, these animals will eat anything they can find: nuts, insects, amphibians, fish, and of course, crabs. They do have great hearing and excellent nighttime vision, even though they are colorblind. One thing that sets Procyon cancrivorus from other carnivores is its ability to use the sense of touch to find food. It can recognize prey by using its tactile senses—a very valuable asset for a nocturnal animal. Because they tend to prefer to live near water, they have probably been observed eating crustaceans, which led to them being given their common name.

Crab-Eating Raccoons weigh between 3 and 7 kg (about 6-15 pounds). They are usually 54 to 65 centimeters in length (approximately 21-26 inches), including the tail. The tail comprises nearly half of the animal's total length. These anmimals can fall prey to any larger carnivore. Sometimes even owls and alligators will kill them for food. Humans may hunt them for their fur. The species is not threatened or endangered at this point, though it has received some attention from international associations. One famous orphaned crab-eating raccoon named Bandit resides at the Karanambu ranch in Guyana.

The Crab-eating raccoon is listed as Least Concern (LR/lc), lowest risk. Does not qualify for a more at risk category. Widespread and abundant taxa are included in this category, on the IUCN Red List of Threatened Species

Namings for the crabeating raccoon

Some facts about the
Crab-eating raccoon