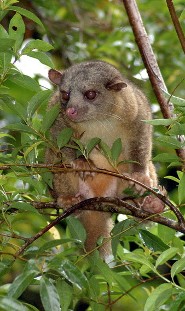 The Olingo (Bassaricyon gabbii) is a light brown and cream colored creature that has a length of between 35 and 48 centimeters or 14 and 19 inches and a weight of 10 to 15 kilograms or 22 to 33 pounds. They have tails that are quite long, usually about the length of the body. The Olingo also has a round head and small round ears. The eyes possess large pupils and are typically cinnamon in color. The creature has 40 razor sharp teeth in the form of canines, premolars, and molars.

Olingos typically eat during the night with this diet consisting primarily of fruits, lizards, and insects. The typical predators of the species consist of snakes as well as large cats such as the jaguar.

The Olingo has no definitive breeding season. The mating is started by the males of the species who produce penetrating and drawn out calls after they detect that a female in heat is nearby. Mating will then take place and will occur numerous times between the two animals.

The animal has an average gestation of 73 days with one birth resulting from the pregnancy. The newborn is deaf as well as blind and has short and sparse hair that is grey-black in color. The newborn is typically about 22 centimeters or 9 inches in length and 55 grams or 2 ounces in weight. The eyes and the ears will typically begin functioning within the first two weeks of life. It becomes fully mature when it reaches the age of 2 years.

It has been difficult for researchers to determine the exact behavior of the Olingo as it typically lives within thick forest environments and are primarily nocturnal, solitary, and arboreal. The creatures typically sleep within the cavities of trees and are excellent jumpers and climbers. In fact, they are able to jump as far as 3 meters from one limb to another. Because of this incredible ability to jump, they are able to often avoid their predators such as snakes and wildcats.

Olingos live in the rainforest located in Northeastern South America and Central America. They primarily live between sea level and 2,000 meters and remain in the tops of trees in the dense forest and they rarely travel from the treetop to the forest floor.

Olingos are quite rare, however, they are rated as IUCN which is the lower risk so they are fortunately not close to being extinct.

Picture of the olingo by Jeremy Gatten, licensed under the Creative Commons Attribution-Share Alike 2.0 Generic license.

The Bushy-tailed olingo is listed as Near Threatened (LR/nt), is close to qualifying for or is likely to qualify for a threatened category in the near future, on the IUCN Red List of Threatened Species

Some facts about the
Olingo