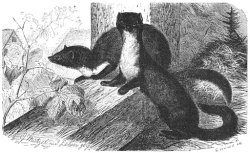 The Beech Marten (Martes foina) or Stone marten is thin, long and short-legged, and its brown covering has a white (forked) mark at the throat's area, and this sets them apart from the Pine marten (marking is cream-colored).

The Beech Marten often lives in places that are occupied by humans, and they can also be seen in the countryside areas, but they stay away from territories that are bare. A Beech Marten can be found in mainland Europe and West/Central Asian territories. At daytime, this marten sleeps and they hunt for preys during the twilight hours. They are omnivorous creatures and the diet mainly consists of small mammals, eggs and earthworms.

Beech Martens have their mating period from June all the way to August, and a male would attempt to mate with a female from within his ground (home) area. A male's first approach might be faced with aggressiveness by the female. The male Beech Marten would keep at it, via a cooing verbalization. The mating would ordinarily happen during dark and would just last up to an hour, on the average.

Litter size is three to four newborns, all of them blind and bald. The weaning would be at two months, however, the mother and newborns would stay together during the tutor sessions. The parent would be teaching these young on hunting methods. The sexual maturity would be attained at fifteen to twenty-seven months.

Basically, this marten is nocturnal, and apart from the breeding periods lives solitary. How it moves is anchored on the speed of its motion, if it is slow, back feet are a bit off-center vis-a-vis the front feet. If one is running, the back feet land at the same area where the front legs do.

Interesting fact: They are known for an inclination of ruining cars, they bite ignition leads and even braking hoses.

The Beech marten is listed as Least Concern (LR/lc), lowest risk. Does not qualify for a more at risk category. Widespread and abundant taxa are included in this category, on the IUCN Red List of Threatened Species

Namings for the beech marten

A beech marten group is called a 'richness'.

Some facts about the
Beech marten