The Yellow-throated Marten - It Is Just Their Natural Color 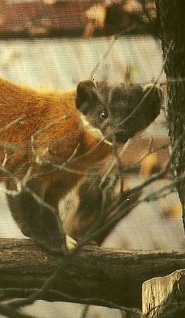 The yellow-throated marten (martes flavigula) is a carnivorous mammal which is known for it's creamy yellow throat and dark brown coat that has an orange-yellow tint.. There are approximately ten sub-species of Martes flavigula, which are all in the weasel family, also known as the Mustelidae family.

Unlike the stone marten, the yellow-throated marten does not have a bushy tail. The tail is also longer than that of a stone marten as are it's limbs, making this medium-sized carnivore a bit bigger than it's counterpart. The head and body of the Martes flavigula average a length of about 40 to 60 centimeters, which translates to approximately 16 to 23.5 inches. The tail of a yellow-throated marten is almost as big as it's body, typically measuring between 38 to 43 centimeters or 14.9 to 16.9 inches. This creature can weigh up to 3 kilograms or approximately 7 pounds, 8 ounces.

The yellow-throated marten is the only one of it's species that lives in tropical and sub-tropical forests. It can be found in the forests of the Korean Peninsula, Himalayas, Russian Far East, and East and Southeast Asia. What distinguishes this mammal from others of it's kind is included in it's name, it's yellow coated throat. They are known as mostly solitary animals and are usually found in close proximity to where people live. Because of their excellent climbing skills, the majority of the time you will find them living in trees.

While the yellow-throated marten is not considered an endangered species as a whole, the Formosan yellow-throated marten falls into the critically endangered category. Overall, this animal has received a least concern rating from the IUCN. This is due to the fact that it can survive in secondary forests as well as the fact that, due to the nasty aroma of it's meat, it is not hunted for food. It is also hunted for its fur in Korea and Siberia, but are still thriving enough in these areas that they have not been determined to be in trouble of extinction.

While they are carnivores, yellow-throated martens also eat fruit. Their diet also consists of things like rodents, honey, insects, bird eggs, and frogs. Another reason why they are not an endangered species could be attributed to the fact that they have no known predators. This is a diurnal animal, which means that it hunts in both the day and night.

The Yellow-throated marten is listed as Least Concern (LR/lc), lowest risk. Does not qualify for a more at risk category. Widespread and abundant taxa are included in this category, on the IUCN Red List of Threatened Species

Namings for the yellowthroated marten

A yellowthroated marten group is called a 'richness'.

Some facts about the
Yellow-throated marten