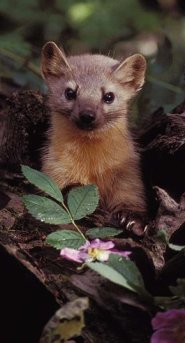 The American Marten (Martes Americana) is a small member of the weasels, and they are also known as "pine" martens, because they are similar in some ways with their European cousins. The fur of the American Marten is soft, their throats are light buff, and they have dark shaded tails/legs. Akin to the other kinds of weasels, the size depends on the gender, the female is approximately 3/4 that of the male's.

Not much is known about the manners and ways of the American Martens, because of their shyness and the fact that they are active during nighttime. Fact is, they are very good climbers, and they could chase a squirrel in a vertical race (up the tree). This marten is a solitary type, but they could exhibit some form of curiousity. The forest is a natural zone for them, as it gives protection and food (prey) at the same time.

They are mainly carnivorous, but there are periods in a year when they would subsist on fruits. They hunt mainly on ground level. Their metabolism is high, and because of that, they need much food, and this need to eat is one reason why many of them get trapped. Small rodents and mice are their principal food, but they could take in hares, squirrels, birds, amphibians, insects, reptiles, crayfish, fruits, nuts and still others. During winter time, they have the capability to tunnel through snow to look for mice, indeed...tenacity is one of the American Marten's traits.

They reach sexual maturity when they are 2 years old, and during the breeding period (July up to Aug), they can exhibit a great deal of aggressiveness, even against other male martens. Litter size is 2 to 4 offsprings. A male plays no part at all in the rearing of these newborns.

The American marten, american pine marten is listed as Least Concern (LR/lc), lowest risk. Does not qualify for a more at risk category. Widespread and abundant taxa are included in this category, on the IUCN Red List of Threatened Species

Namings for the American marten

A American marten group is called a 'richness'.

Some facts about the
American marten