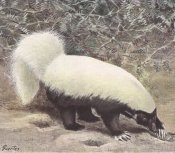 Ordinarily, one would be very focused when it is busy with a specific task, and as a result, it would not notice a predator at its back. The strongest facet of the defense system of the Common Hog-nosed skunk is its musk, which is very repelling. So much so that it has been studied that even rattlesnakes get repelled by the smell.

This skunk prefers grounds which are sparsely vegetated and at the same time, filled with rocks. They often construct dens from crevices of boulders or other forms of shielded places.

The fur of this skunk is rough, with a brown coloring over a dark brown layer. Big white stripe goes along the body, it has a long snout, and both front and hind feet possess five digits. However, their front feet, which are used for digging, are better constructed than the hind ones.

When in captivity, these skunks are alleged to be docile enough to be kept as a pet (if you can stand the smell !).

Interesting fact: It is possible to touch newborns, even in the presence of the mother, assuming the parent trusts that particular person.

The Common hog-nosed skunk, western hog-nosed skunk is listed as Least Concern (LR/lc), lowest risk. Does not qualify for a more at risk category. Widespread and abundant taxa are included in this category, on the IUCN Red List of Threatened Species

Namings for the western hognosed skunk