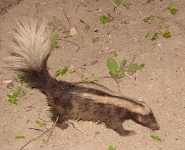 The Striped Hog-Nosed Skunk (Conepatus Semistriatus), also referred to as the Amazonian Hog-Nosed Skunk, is a Neotropical mammal. This means that they are generally found in Central and South America, from Southern Mexico continuing South Eastwards into Peru and Eastern Brazil. The Striped Hog-Nosed Skunk is similar in size to an average domestic house cat, perhaps slightly smaller. Their size is about 57 cm (22 inches) in length with an average weight of 1.6 kg (3.5 lbs), and the male of the species is generally larger than the female.

In appearance, the Striped Hog-Nosed Skunk is similar to the common skunk found in North America with some slight differences. Their coat is predominately black in color with the white stripe forming at the back of their necks and extending down their back where it divides into two stripes. The tail is black and white but not as bushy as that of other species and their coat is very coarse, lacking the qualities for which the North American skunk is valued. The nose is long and extends into a pig-like "snout" which is used to root in the Earth, and the front feet have strong sharp claws for digging. Like all skunks, they have anal glands which are capable of spraying a foul-smelling musk when threatened.

The habitat of the Striped Hog-Nosed Skunk changes seasonally. During dry seasons they can be predominately found in deciduous forests, shrub woodlands, and occasionally grasslands. They tend to avoid desert areas and thickly wooded forests, preferring more sparsely wooded areas. During the wet season, the skunks tend to be more selective, sticking to higher levels of elevation where food is plentiful. The omnivorous creatures feed on insects, fruit and eggs, invertebrates, and small vertebrates such as lizards and small mammals.

The Striped Hog-Nosed Skunk is quite the solitary little mammal. Being both loners and nocturnal, their mating habits and reproduction cycles are not widely documented. It is assumed that these are similar to that of other skunk species, which means that mating generally occurs in the spring and results in one litter of 2-5 offspring per year. They most likely retreat underground or into some type of den or burrow to give birth. The lifespan of this animal is not known for longevity, and at this time the Striped Hog-Nosed Skunk does not appear on any endangered species or conservation lists.

The Amazonian hog-nosed skunk, striped hog-nosed skunk is listed as Least Concern (LR/lc), lowest risk. Does not qualify for a more at risk category. Widespread and abundant taxa are included in this category, on the IUCN Red List of Threatened Species

Namings for the striped hognosed skunk