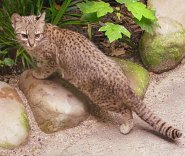 Geoffroy's Cat (Oncifelis geoffroyi) is the most common cat of South America. It resides on the Andes mountains, in grasslands and woodland areas. The Geoffroy's Cat is the size of an ordinary domesticated cat. Colors can vary however, they can be brown or gray, sometimes yellow. They can become up to 15 years of age in the wild.

The Geoffroy's Cats living more south have a more grayish coat, while the ones living more north have a brownish yellow coat. The Geoffroy's Cat has a circular head, short fur (in summer), and the male is ordinarily bigger than the female side. They have big ears, and this permits it to be aware of sounds coming from an approaching predator or prey, for that matter.

The claws are deadly-sharp, and this is for two reasons. First, to be able to climb, and second, to be used for stabbing its prey. It cannot be denied that these cats are good swimmers, as they can easily cross rivers.

A female Geoffroy's Cat produces one litter annually, where the litter size is at most 3 kittens. The male does not do anything as far as rearing the young is concerned. The gestation period for a mother would be 72 up to 78 days, and when it is time to give birth, they give birth at a rocky terrain. After 6 weeks the kittens are fully mobile.

The male reaches sexual maturity after two years, while the female reaches sexual maturity at eighteen months. Whatever predator in the wild would attempt to turn this cat into lunch, that predator might be disappointed, or more than disappointed if it is the one who gets killed. In other words: it is at the top of the food chain. The Geoffroy's Cat is a match to almost any kind of adversary, of course with one exception, humans. They are often killed for the value of the fur.

Their diet consists of small lizards, rodents, insects, and sometimes a frog or fish.

Interesting fact: This cat actually shares its home (at grasslands) with the Kodkod, another kind of cat.

Picture of the Geoffrey's cat by Daf-de, licensed under GFDL

The Geoffroy's cat is listed as Near Threatened (NT), is close to qualifying for or is likely to qualify for a threatened category in the near future, on the IUCN Red List of Threatened Species

Namings for the Geoffroy

A young / baby of a Geoffroy is called a 'kitten'. The females are called 'queen' and males 'tom '. A Geoffroy group is called a 'clowder, clutter, pounce, kindle (young), embarrassment (young),'.