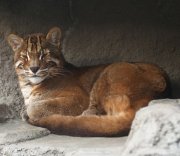 The Asian Golden Cat (Catopuma temminckii) can be found scattered all over Southeast Asia, particularly, in deciduous forests, rain forests, and open terrain with rocky areas.

A typical Asian Golden Cat weighs about 8 to 15 kg. Its fur is coarse and thick, and the markings on their fur are not uniform. It changes from one location to the next, the fur's colors could be bright brown, red or gray-brown. Tail's ventral surface is principally white, and experts think that these could be used for signaling purposes.

Mating/breeding of the Asian Golden Cats occurs in hollow trees, hollows in the ground or among rocks. An Asian Golden Cat's gestation lasts up to around 95 days, and a set of 1 to 2 kittens is expected. The newborns' weight would be doubled after three weeks and tripled after six weeks. The male helps in raising the newborns.

They are mostly active during the night and they hunt hares, deer, lizards, birds and other kinds of smaller animals.

The total population of this species in the wild is unknown but it is thought to be uncommon. It has been rarely seen in the wild, although over the 1990s a few camera trap photos have been collected and two golden cats were radio-collared in Thailand’s Phu Khieu National Park (source IUCN). They are also hunted for their pelt, and the bones are used in certain medicinal mixes.

Interesting fact: Local Thai people strongly believe that when a tiger is near, burning the fur of this cat would surely help. It would cause the tiger to flee.

The Asiatic golden cat, golden cat, temminck's cat is listed as Vulnerable (VU), considered to be facing a high risk of extinction in the wild, on the IUCN Red List of Threatened Species

Namings for the Asiatic golden cat

Some facts about the
Asiatic golden cat