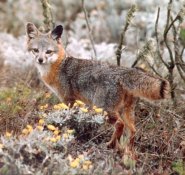 The Island fox (Urocyon littoralis) is also known as the Coast Fox, Channel Island Fox, Insular Gray Fox and Dwarf Fox. About 18,000 years back, the last ice age occurred and the sea level was lower than it is now so that certain animals could traverse the Santa Barbara Channel. A cousin of the grey fox was among these creatures, and when that Ice Age was through, the ice melted, the sea level went up. These foxes got isolated over time, the mainland no longer accessible to them.

At present, the Island Fox can be found in some of the biggest islands of the Channel Islands. One thing that is impressive, the Insular Gray Foxes are flexible, they could adapt to various habitats. The Channel Islands holds many kinds of environments: valleys, grasslands, sand dunes, scrub areas, coastal forests, marshlands...you name it. Island Foxes are capable of surviving in all of these mentioned habitats.

It is less known than their cousins. Compared to their cousins, they are really smaller. The head/body length is on the average, 50 centimeters, while its tail could reach a maximum of 30 centimeters. Compared to the mainland cousin, the Island Fox's tail holds 2 less vertebrae. Its lips, nose, chin and the eye areas are all set in dark, the neck and some parts of the legs are cinnamon-colored. The young foxes have a lighter and thicker coat. They would start breeding when they hit the first year, and can become 4 to 6 years, but there have been records of a few reaching fifteen years in captivity.

This fox is diurnal and solitary, and it hunts mostly in daytime, but they can also be up and about at nighttime. They are capable of subsisting on both animals and plants. Their diet consists of snails, lizards, mice, prickly pear, saltbush, toyon, and manzanitas.

The decrease in their numbers is nothing short of alarming. In 2000, a 95% decrease was recorded in the populace number at 3 Channel Islands, in just a 4-year period.

Interesting fact: The Island fox is the second smallest fox in the world, after the fennec

Namings for the island gray fox

Some facts about the
Island gray fox