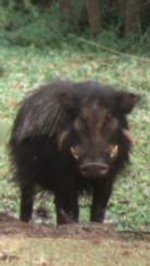 The Giant forest hog (Hylochoerus meinertzhageni) is the largest pig of the 16 pig species (family Suidae) in the world. The length of adults ranges from 130-210 cm, their height from 75-110 cm and they can weigh between 180-275 kg. They live in scattered populations in the rainforests of West and Central Africa. They are shy, nocturnal creatures, which feed on grass and do not dig with their snouts for food like other wild pigs. 'Wallowing', rolling through the mud, is a favourite activity of them. The male is responsible for defending the group and does so very aggressively. Giant forest hogs, like other pigs practice 'coprophagy', which means they consume feces of other animals, because they contain amounts of semi-digested food. Their main predators are the leopard and the hyena.

Interesting fact: In the Congo, eating a giant forest hog is believed to bring misfortune.

Picture of the Giant forest hog by S. Fimpel, licensed under GFDL

The Giant forest hog is listed as Least Concern (LR/lc), lowest risk. Does not qualify for a more at risk category. Widespread and abundant taxa are included in this category, on the IUCN Red List of Threatened Species

Namings for the giant forest hog

The females are called 'sow' and males 'boar'. A giant forest hog group is called a 'drift or herd'.

Some facts about the
Giant forest hog