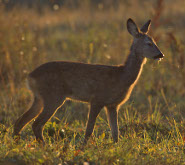 The Roe deer (Capreolus capreolus) (sometimes called the Western Roe Deer) is a medium sized to smallish deer species that has an average body weight of anywhere between 40-70lbs (15-31kg) and is usually around 3 to 41/2 feet in length (.9 – 1.6 meters) and can bet 2 to 21/2 ­feet tall at the shoulder (.6 to .8 meters). Its antlers are somewhat short and erect, while its facial coloring is a red to grey, while its coat overall is reddish. They do seasonally change colorings as in the summer it is more of a yellowish to golden red while during the winter it can be brown or even nearly black, while the underside is lighter. The tail is small, almost going without notice upon the first viewing, and only the males of the Roe deer have antlers. They live throughout Western Europe, from Spain to Turkey, and all the way up to Scandinavia and are also present in England, Scotland and Ireland.

The antlers are lost in the winter time and re-grow each mating season. When a juvenile male grows its first set they are without any branching and are short at just 2-5 inches (5-14cm), while after their second set have been lost they begin to branch. If a healthy adult male – called a buck – has plenty of food their antlers will be branched and can grow up to nearly a foot – at 8-10 inches being the average (20-25cm) with two, three, and maybe even four tips. When the antlers regrow they are usually covered in a fine fur, and that fur vanishes after the antlers have matured – additionally the Roe deer is the only known species of deer that regrows its antlers during winter.

The Roe Deer’s binomial name is Capreolus capreolus, as their Genus is Capreolus – which has one other species called the Siberian Roe Deer (sometimes Eastern Roe Deer). The Genus belongs to the Subfamily Capreolinae, which contains New World Deer (a misnomer as although all of these deer originated in the Western Hemisphere, migrations many thousands of years ago distributed them to the Eastern Hemisphere) and contains many species, such as Marsh Deer, Moose (Elk), Brocket, and the famous Reindeer. Capreolinae belongs to the family Cervidae of which three other subfamilies of deer exist. Cervidae belongs to the Infraorder Pecora, of which there are six living families and includes species like the cow, the giraffe, antelope, sheep, and many more. Pecora belongs to the Suborder Ruminantia, of which only one other Infraorder exists, with all of its members extinct except for the Mouse Deer. Ruminantia belongs to the order Artiodactyla which contains three other orders that includes the Hippo, Camels, and pigs. It is thought that Whales may belong in this scheme however the ranking is as of yet not established. Artiodactyla belong to the Superorder Laurasiatheria, of which members include bats, carnivores, anteaters, moles, and many extinct orders. This Superorder belongs to the Infraclass Eutheria (placental mammals and extinct close relatives) which belongs to Theria (Placental + Marsupials) and that belongs to the Class Mammal.

The Roe deer is what is called crepuscular, whereas daytime animals are called diurnal and nighttime animals are called nocturnal, crepuscular means at dawn and dusk. With their powerful legs and attuned sense of balance they are a very fast and graceful, they can easily escape slower predators. They dwell mostly in the woods but do venture into lightly wooded areas and grasslands for food. Their diet consists of grasses (preferably young and very moist), leaves, young shoots, and berries. Roe deer usually live for about ten years, and when it is startled it will emit a noise that sounds similar to a canine bark. They spend most of their lives alone, with the exception of mating season.

Picture of the Roe deer by Marek Szczepanek, licensed under GFDL

The Roe deer is listed as Least Concern (LR/lc), lowest risk. Does not qualify for a more at risk category. Widespread and abundant taxa are included in this category, on the IUCN Red List of Threatened Species

Namings for the western roe deer

Some facts about the
Western roe deer