The Marsh Deer: Brazil's Native Species in Danger of Extinction 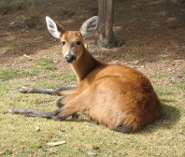 The marsh deer (Blastocerus dichotomus) was once found in several South American countries, but is now only found in small areas of Peru, Argentina but mostly in southern Brazil. Fossil remains of marsh deer have been found northern Brazil, Uruguay and Patagonia. The species dwindled in numbers so much that in 1996 it was listed as "vulnerable" by the International Union for the Conservation of Nature and Natural Resources (IUCN.) It has never been taken off the vulnerable list.

Part of the reason the marsh deer is such a vulnerable species is due to its size. It is the largest deer species in South America and a tempting source of meat for the growing human population. Since adult marsh deer can reach weights of 330 pounds (150 kilograms), that's a lot of meat on the hoof for a South American family. This has made humans the current main predator for the marsh deer.

Before the rise of Homo sapiens, the only predators big enough to bring down a marsh deer were jaguars and pumas. Since these big cats are also threatened, they are not much competition for human hunters. Marsh deer grow to six feet (two meters) in length and their backbones reach a height of three feet and eleven inches. Males grow antlers almost two feet (60 centimeters) long. As their name suggests, they prefer to live in swamps or marshes, although they will happily trot out to any flooded plains (but only when they are flooded). The reason for this preference has partially to do with camouflage. Their light tan hides and black legs blend in with the reeds and long grasses of a swamp, but stick out in other areas. Marsh deer also prefer to eat plants that grow only in marshes or ponds, such as the water lilly.

Marsh deer are trying to adapt to the sweeping changes in their homeland. Although deer are most active at dawn and dusk, the University of Michigan Museum of Zoology reports that some herds of marsh deer are now only active at night. Some herds are also moving to more mountainous ranges where people tend not to go. An average size herd of marsh deer are from five to seven animals.

Picture of the marsh deer by Whaldener Endo licensed under GFDL

The Marsh deer is listed as Vulnerable (VU), considered to be facing a high risk of extinction in the wild, on the IUCN Red List of Threatened Species

Namings for the marsh deer

A young / baby of a marsh deer is called a 'fawn or ass'. The females are called 'doe, hind or cow' and males 'buck, stag or bull'. A marsh deer group is called a 'herd'.

Some facts about the
Marsh deer