Bawean Deer - the Smaller Cousin of the Hog Deer 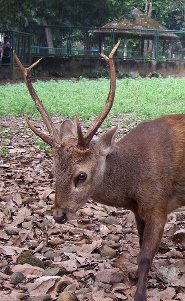 The Bawean Deer (Axis kuhlii) is also known as the Kuhl's hog deer. This unique creature is only found on the Island of Bawean in Indonesia. and lives in the secondary forest in the dense underground. This beautiful deer is native to Bawean and it is sadly amongst the critically endangered species because of the logging and agriculture. Their habitat is being slowly destroyed and causing them to find less and less food and places to live. The diet of these deer consists mainly of grass and leaves.

The Bawean Deer doesn't have a lot of predators but the few they do have are fairly vicious, one of the main enemies is the large snakes like the python, wild boars, wild dogs and vultures prey on the baby deer. The Bawean Deer is smaller in size than its cousin the Hog deer. Their size is about 60-70cm (24-28" inches) in height with a weight of 50-60kg (110-132 pounds). Their legs are shorter in the front than their hind legs. This causes their bodies to slope toward the shoulders. They are docile creatures of nature.

The male Bawean Deer has antlers that can grow to be 47cm (18"inches) long. These deer are nocturnal which means that they come out at night and sleep in the day time. When they are trying to communicate with each other they use a barking like sound. They are solitary creatures and don't travel in packs, not very social.

Bawean deer are the small cousin of the hog deer and are humble vegetarians that live in the secondary forest. They are critically endangered and they will be extinct soon if the humans do not save their habitat and stop chopping down so many trees and allow them to have their natural habitat to feed and tend to their young.

Picture of the Bawean deer by Midori, licensed under GFDL

The Bawean deer, bawean hog deer, kuhl's hog deer is listed as Endangered (EN), considered to be facing a very high risk of extinction in the wild, on the IUCN Red List of Threatened Species

Namings for the Bawean deer

Some facts about the
Bawean deer