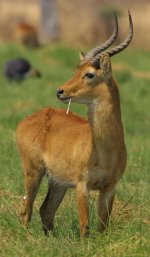 The Puku (Kobus vardonii) is one of the smaller deerlike antelopes of the Bovidae family. Herds of these animals live in the drier areas of swampland and rivers or wet grasslands, and they are always near the water. They are scattered throughout eastern and central Africa, particularly in wet areas in Zambia and southern Democratic Repblic of Congo. These antelopes are also found in the area of Chobe River, near Kasane, in Botswana. However, 75% of the total population is assumed to be restricted now to the Kilombero Valley in Tanzania.

Puku are often mistaken for impala or lechwe because these three closely-related African antelopes often graze together. There is strength in numbers as they have common enemies. However, the puku's size is smaller although it is bulkier compared to the impala. They are around 80 centimeters tall on the shoulders, and their weights are between 70 and 80 kilos. These antelopes are brown like sand or nearly uniformly red in colour with the underbelly having a lighter shade while the impalas have ankles that are black and markings on their faces and the lechwe have black markings on the legs and high rear-quarters. The male puku has two horns that are shaped a little like a lyre and measure about 50 centimeters, smaller than the horns of the impala and lechwe.

Puku eat grass as they graze in water rich grassland.

They live in herds that are segregated and a territorial male separates the female herd from the bachelors. This alpha male holds the female herds in its territory. A herd, meanwhile, can have about twenty females. Only submissive bachelors are allowed to mingle within the territory.

Puku are active during the earlier time of the morning and again in the late afternoon. When frightened or disturbed, they sound off a repeated whistle and they stot off with heads held up high compared to the lechwe that have their heads held down low. On rainy seasons, herds stay together to have added security and safety.

Picture of the Puku by Paul Maritz, licensed under GFDL

The Puku is listed as Conservation Dependent (LR/cd), the focus of a continuing taxon-specific or habitat-specific conservation programme targeted towards the taxon in question, the cessation of which would result in the taxon qualifying for one of the threatened categories below within a period of five years, on the IUCN Red List of Threatened Species