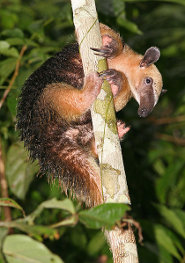 The Southern Tamandua (Tamandua Tetradactyla) is a species of Anteater native to South America. Much smaller than its 8 foot cousin the Giant Anteater. It weighs in at about 4.5 kg (9.9 lbs) and has an average body length of 535 mm (21.1 in) to 880 mm (31.5 in.) Sometimes called "Collared Anteater" or "Lesser Anteater, the Southern Tamandua can be found in varying climates ranging from tropical rain forests to dryer savannas. Ideal habitats for this species include those with nearby rivers or streams as well as dense woods.

Trees are important as they spend a great deal of time in them both to remain safe from predators and to find food. The Tamandua's diet consists of (as you might guess) ants, as well as termites, and assorted other insects even bees. Most of the feeding takes place during the night because the Southern Tamandua is primarily nocturnal hunting at night and nesting in tree trunks and abandoned burrows during the day.

The Southern Tamandua is a solitary animal that does not tend toward aggression but does have some interesting methods of defense when threatened. One important aspect of the species is its notably strong forearm and long curved claws. these are typically used to break open nests and dig out their prey, however, it is not uncommon for the Tamandua to hang from its prehensile tail and use its powerful forearms to defend itself from aggressors. If the strong arm and long claw method doesn't work, Tamandua Tetradactyla has a defensive backup. Much like a skunk, the Southern Tamandua can emit a scent from its anal gland that will discourage those who aggravate it.

The biggest threat to the Southern Tamandua is posed by humans. According to the IUCN Red List, the Tamandua is of "least concern" due to its wide distribution, however The Convention on International Trade in Endangered Species lists Tamandua Tetradactyla as endangered due to widespread hunting. Furthermore, depletion of rain forests will eventually lead to a significant loss of habitat and food for these unique animals.

The Collared anteater, lesser anteater, northern tamandua, southern tamandua, tamandua is listed as Least Concern. Does not qualify for a more at risk category. Widespread and abundant taxa are included in this category, on the IUCN Red List of Threatened Species

Some facts about the
Southern tamandua