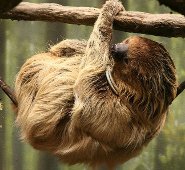 The Southern two-toed sloth (Choloepus didactylus) is a member of the megalonychidae family which currently resides in the rain forests of South America. In appearance, the choloepus didactylus is between 20 to 30 inches long (5 to 8 dm) and weighs between 8 to 18 pounds. (4 to 8 kg). The body of the sloth is fairly short, with the longest part being four arms that end in, as the name implies, two hooked claws. Both the neck, head, and nose are short and stubby, but perhaps the most interesting feature of the southern two-toed slots is it's fur. A mixture of greyish brown hair covers the entire body, however the fur curves the opposite way of all other animals. The fur also contains several grooves which pick up algae and moss, giving the choloepus didactylus a greenish appearance even though the fur itself is brown.

The southern two-toed sloth is most well known for being the slowest animal on Earth. The creature spend nearly all of their life hanging upside down from branches, even when they sleep, mate, and give birth. This allows them to stay out of reach from most predators, despite being exceptionally slow. Because of this, the only predators they have to worry about are those that can fly or climb trees, such as large eagles, ocelots, or jaguars. It may also be hunted by humans as a source of meat, however their fur allows them to camouflage so well within the trees that they can be difficult to find.

The southern two-toed sloth feeds on mostly plant life, including leaves, twigs, berries and other fruits. They will occasionally eat small prey, such as insects, and less commonly sloths that are around human life have been seen consuming human feces from restrooms. With the exception of the latter, all these foods can be found within the trees they hang from. Because of this, the only time the choloepus didactylus ever descends from it's branches is switch trees.

While the two-toed sloth itself isn't endangered, the environment they live in is. Because of the creatures slow speed, they rely heavily on their ability to blend in with their surroundings. Unfortunately, their environment is being ripped apart on a daily basis due to rain forest logging. South America is currently the last remaining location this species can live in naturally, and many worry that with the rain forest being torn down, it will only be a matter of time before the southern two-toed sloth becomes endangered or extinct.

The Linné's two-toed sloth, southern two-toed sloth is listed as Least Concern. Does not qualify for a more at risk category. Widespread and abundant taxa are included in this category, on the IUCN Red List of Threatened Species

Some facts about the
Linne's two-toed sloth