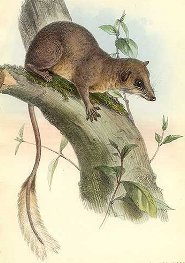 The Pen-tailed Treeshrew (Ptilocercus lowii) is a species of treeshrew in Malaysia, Indonesia, and Thailand. It is unique as it is the only member in its own Genus and Family, while all the other treeshrews are in a different family. The Pen-tailed Treeshrew is one of the currently known seven wild mammals that actively and consistently (if not chronically) consumes mass quantities of alcohol. They drink the human equivalent of around 12 glasses of wine daily in under two hours from fermented nectar coming from the Bertram palm. However, the Pen-tailed Treeshrew shows no ill effect or intoxication from such indulgence in alcohol, and it is able to process it quickly; in recent measurements of markers for breakdown in ethanol point to it being metabolized by the Pen-tailed Treeshrew in ways which alcohol is not processed as quickly in human beings and it appears to be their main if not only food source. The Pen-tailed Treeshrew’s tail is hairless and long, until the very end of the tail when it resembles a feather, while the rest of the shrew is usually a medium brown, with a tan underbelly. It has a pointed face, moderately sized eyes in proportion to its size, attentive ears and significant whiskers, it also has hands that resemble other shrews, and its fur is tightly packed. They’re body length is between 4-6 inches (11-15cm) and their tail can measure up to 4.5 inches (11cm) while their weight is usually 1.5 ounces (43 grams).

Because treeshrews are not the same as shrews, and are indeed distant relatives of our own species, they may indicate that consumption of alcohol in the evolutionary line that lead to humans may have occurred, and it may be why today we are still fascinated by alcohol. Because the treeshrew resembles early primates it is no far leap to guess that perhaps an ancestor of our own relied on alcohol naturally created in nectars, and indeed chimpanzees and gibbons eat fruits and nectars today, which can easily ferment. However in humans, the ability to tolerate such high levels is no longer present, and it can cause disease and even death.

The Pen-tailed Treeshrew’s Binomial name is Ptilocercus lowii, and it is the only member of its Genus Ptilocercus, and the only member of its Family Ptilocercidae. The Family Ptilocercidae belongs to the Order Scandentia of which all the tree shrews belong, with 20 total species. Scandentia belongs to the unranked Sub-Superorder Euarchonta of which the flying lemurs, extinct Plesiadapiformes (the ancient extinct relatives of all primates), and Primates belong (that’s us by the way). This unranked grouping belongs to the Superorder Euarchontoglires, of which the Glires such as rodents and rabbits also belong. Euarchontoglires belong to the Infraclass Eutheria, which are all the placental mammals. Eutheria belongs to the Subclass Theria, of which all living mammals belong to with the exception of the monotremes.

The Pen-tailed tree shrew is listed as Least Concern (LR/lc), lowest risk. Does not qualify for a more at risk category. Widespread and abundant taxa are included in this category, on the IUCN Red List of Threatened Species

Some facts about the
Pen-tailed tree shrew