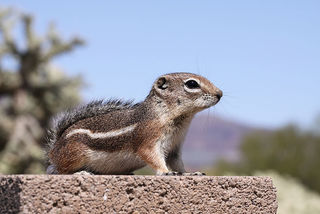 The Harris's antelope squirrel is listed as Least Concern (LR/lc), lowest risk. Does not qualify for a more at risk category. Widespread and abundant taxa are included in this category, on the IUCN Red List of Threatened Species

Namings for the Harris

A young / baby of a Harris is called a 'pup, kit or kitten'. The females are called 'doe' and males 'buck'. A Harris group is called a 'dray or scurry'.

Some facts about the
Harris's antelope squirrel

Facts about the Harris's antelope squirrel

References01, 02, 03, 11, 12 CommentsNEW MEXICO: Only one subspecies of Ammospermophilus harrisii is confirmed in New Mexico, A.

(273K) Harris's Antelope Squirrels are cute little desert dwellers - they look a lot like a long chipmunk, with stripes down their backs. (Full text)

The Harris's Antelope Squirrel is from the order Rodentia. (Full text)