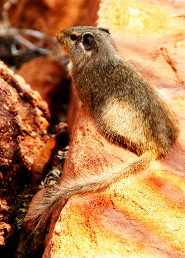 In the rocky outcroppings of Namibia, Angola and northwest South Africa lives a large dirt-brown or duty grey rodent that strongly resembles a very large guinea pig with a fluffy tail. It’s called the rock rat or dassie rat (Petromus typicus). "Dassie" is an Afrikaans word meaning "hyrax", which is another species of brown furry mountain-dwellers that lives in Africa. There are at least fourteen known subspecies of dassie rat but all can interbreed and all are generally classified as Petromus typicus.

Unlike many other African species, dassie rats are thriving as a species, even entering into urban dwellings. There they are often prey to domestic cats. The chubby rodent has the ability to flatten its ribs, making it able to hide in very narrow openings. Another survival quirk is that they can go for long stretches without drinking water. They derive all the water they need from their diet of grasses, leaves, tender stems and occasionally insects.

Dassie rats have narrow heads, rose-petal shaped ears and large eyes in relation to their heads. Their short, silky fur differs in coloration depending on what subspecies it is. Fur varies from a sandy tan to a chocolate black. Their bellies are devoid of fur. Like other rodents, the front teeth continue growing throughout the dassie rat’s life, but the cheek teeth do not. They have four digits on each paw that end with a claw. The rocks and hills of the dassie rat’s environment naturally wear down the claws. The fur around the hind claws is longer and stiffer than anywhere else on the body. Since dassie rats groom themselves with their hid claws, it is throised that the stiff hairs help act as a comb.

Adults weigh from 6 to 11 ounces (170 to 300 grams) and grow to a length of 5.5 to 8.3 inches (14 to 21 cm). Their tails, though, can grow to 6.69 inches (17 cm). Females have a very unusual anatomical feature – their nipples are on the sides of their bodies instead of on the belly. This helps a mother dassie rat nurse her young in rock crevices or other extremely narrow places where she makes her den.

Dassie rats like the company of their own kind. They live in small colonies of a few adults and babies. The largest colony reported was 22. A solitary dassie rat would soon be a dead dassie rat, as one rat could not watch out for predators such as snakes or birds of prey or attacking hyraxes. Although hyraxes do not eat dassie rats, they can chase dassie rats from food sources and dens.

Dassie rats sleep during the day and are most active at dawn and dusk. Females can have up to 3 babies in a litter, but usually have only 2. Her gestation is unusually long for a rodent – three months. When the babies are born, they are fully furred, with their eyes and ears open and can run within hours.

PIcture of the dassie rat by Vernon Swanepoel, licensed under the Creative Commons Attribution 2.0 Generic license.

The Dassie rat is listed as Least Concern. Does not qualify for a more at risk category. Widespread and abundant taxa are included in this category, on the IUCN Red List of Threatened Species

Namings for the dassie rat

A young / baby of a dassie rat is called a 'kitten, nestling, pinkie or pup'. The females are called 'doe' and males 'buck'. A dassie rat group is called a 'colony, horde, pack, plague or swarm'.

Some facts about the
Dassie rat