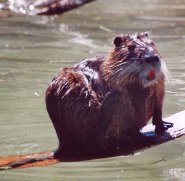 The Coypu (Myocastor coypus), a large rodent herbivore, was originally found in South America although it has been introduced to various other regions such as Africa, Europe, Asia, and North America. It was introduced predominantly for its fur. Although they were initially believed to be a valuable species, they have become largely invasive through their destructive burrowing. The animal is typically found near rivers in burrows surrounding the water and eats primarily river plants.

The coypu looks similar to a beaver or a gigantic rat and has often been mistaken for muskrats although the muskrat is significantly smaller. The animal weighs between 5 to 9 kilograms or 11 to 20 pounds with a body between 40 to 60 centimeters or 16 to 24 inches. Their tails measure approximately 30 to 45 centimeters or 12 to 18 inches in length. The coypu has dark brown outer fur which is quite coarse and softer fur underneath. The animal is quite unique due to its white muzzle as well as its peculiar hind feet, which are distinctly webbed. In addition, female coypu have nipples which are located high on their body so that they are able to feed the young while floating.

The coypu has become extinct in many of their natural, native habitats due to hunting. Because of this, farms were established during the 19th and 20th centuries. The initial farms were established in Argentina and were later introduced in Asia, North America, and Europe. However, these fur farms have not been successful and most of the animals have been released back into the wild creating problems in the surrounding habitats due to the coypu’s excessive eating of plants, burrowing, chewing of tires and paneling on homes, as well as the destruction of irrigation systems. They are not currently considered to an endangered species. Predators of the coypu exist both on land as well as in the water. Their primary predators include alligators, red wolves, and well as wild cats.

Although they are not currently considered an overall endangered species, they do undergo periods of population reduction particularly during harsh winters. The animal is not very resilient in the cold and often undergoes frostbite in their tails which can cause infection and, potentially, death. Because of this, there are areas in which the animal has become extinct including parts of Scandinavia. However, during mild winters, the animals survive quite well particularly in areas of the northwestern United States.

The Nutria is listed as Least Concern (LR/lc), lowest risk. Does not qualify for a more at risk category. Widespread and abundant taxa are included in this category, on the IUCN Red List of Threatened Species

Some facts about the
Nutria