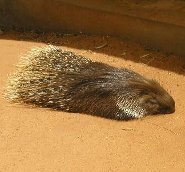 The Indian crested porcupine (Hystrix indica) is a rodent found throughout the Middle East and southern Asia in habitats as diverse as grasslands, forests, scrublands and mountains, though it creates underground homes for itself whatever the climate. Its lengthy claws and broad feet are designed to make digging expedient.

It is a member of the Old World Porcupines, and its coloration is brown and black with bands of white. Its habits are nocturnal, and its diet includes such items as roots, grains and fruit. While it is primarily an herbivore, it will occasionally chew on bones for added nourishment, especially calcium.

Indian porcupines can reach a size of up to 44 pounds (20 kg) and more than three feet (91 centimeter). They typically have litters of 2 to 4 pups, with up to two litters a year. Following a gestation period of about 120 days, the pups are born with soft quills, and their eyes are open from the beginning. Adult males are called boars, while the females are sows and a group is known as a prickle. While they usually live with at least one other porcupine, they generally forage for food on their own.

Because of their fierce defensive instincts and sharp quills, predators tend to avoid porcupines, but their natural enemies include leopards and tigers, while

These quills, which grow in layers, are the porcupines' most distinctive features, and the longest ones can grow up to a third of the length of their bodies. When they attack, Indian crested porcupines move backward and lodge their quills into the offending animal, often inflicting a fatal wound. Meanwhile, the short quills serve as a warning rattle to other nearby animals. Many big cats have been found with quills embedded in them, demonstrating the ability of the Indian crested porcupine to hold its own against much larger enemies.

Because the Indian crested porcupine is so adaptable and wide-ranging and has so few natural enemies, it is extremely common and not under any consideration for endangered status, being given the designation of Least Concern.

The Indian crested porcupine is listed as Least Concern (LR/lc), lowest risk. Does not qualify for a more at risk category. Widespread and abundant taxa are included in this category, on the IUCN Red List of Threatened Species

Namings for the Indian crested porcupine

Some facts about the
Indian crested porcupine