Guinea Pig - the Other White Meat 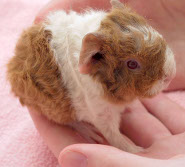 When we think of guinea pigs (Cavia porcellus), 'interesting' probably isn't the word that first comes to mind. However, these little creatures commonly kept as children's pets are far from ordinary. In this article, we will explore the reasons why.

Guinea pigs are born with their eyes open (the guinea pig in the picture is only 8 hours old), which is uncommon for most offspring in the animal kingdom. They are also born with a great deal of fur (see picture (!)), which is also abnormal since most animals are bald at birth. It just keeps getting weirder, with the guinea pig being capable of eating solid food from day one. They don't skip milk altogether, but are well able to eat solid food on the very same day they are born.

Despite having such large, orb-like eyes, guinea pigs suffer from rather poor eyesight. Their hearing is very sensitive to make up for the lack of sight. Guinea pigs are really good at swimming despite their sausage shaped bodies. They like to hop, and do so quite frequently when they are happy, but they don't rise very far off the ground. Guinea pigs are unable to climb.

The guinea pig has a rich history of serving as a food source. The first known instance of guinea pig cultivation occurred in 5000 BC in what would be modernly known as Bolivia,

listofcountriesoftheworld.com/pe-animals.html" title="" rel='external'>Peru. Later, guinea pigs were brought aboard ships by sailors as a portable meat supply. This coupled with their surprising swimming abilities even gave the guinea pig a unique name in Germany: 'Meerschweinchen' which literally translates to 'little sea pig'. The guinea pig is the national dish of Peru to this day, with a whopping 65 million of them consumed on average in a year. Guinea pig, called cuy in Peru, is actually a very healthy meat. It has more protein than beef and less fat too. But the meat is tough and it definitely doesn't taste like chicken.

Guinea pigs are believed to be descended from various closely related species of cavy found living wild in South America. These wild cavies have a social structure similar to cattle, with the cavies living together in herds.

The ideal guinea pig diet is primarily grass, and like humans guinea pigs must get their vitamin C from their food.

The Guinea pig is listed as Least Concern (LR/lc), lowest risk. Does not qualify for a more at risk category. Widespread and abundant taxa are included in this category, on the IUCN Red List of Threatened Species

Namings for the Guinea pig

Some facts about the
Guinea pig