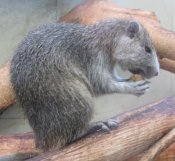 The Desmarest's Hutia (Capromys pilorides) lives in Cuba and on adjacent islands, but they are not confined to a single habitat. They could be seen all over Cuba, namely: cloud forests, forests, arid semi-deserts, marshy parts and the mountains. Desmarest's Hutias could be segregated in 2 classes, those residing in North Cuba, and those at South Cuba's territory. Hutias living at the north side are in the marshes, places characterized by a lot of red mangroves. The Desmarest's Hutia of this kind stays in the parts of those mangroves. On the other side, those living at the south exhibit a much more terrestrial trait.

A Desmarest's Hutia could weigh from 1 all the way to 9 kgs, but the average could be placed at seven kilograms. These Hutias are considered of the biggest kind, but their movements are anything but graceful. Having short legs, they move in unsteady fashion, "waddling" would be the best word. Still, if a Desmarest's Hutia's life is on the line, (say, a predator aims to turn him into breakfast), the waddling becomes hopping...

They have rough fur and the dorsal part is usually with a darker hue. Shades of the covering vary: black, brown, yellowish and even red. Its tail is totally hidden from view, with all the hair, and their claws are big. Longevity of this hutia (in captivity) is from eight to eleven years, and they can have one to three offsprings. Unlike many animals, their newborns can move and see right after being born. Sexual maturity of these hutias are hit at sometime close to a year. They communicate with each other via scent marking.

These hutias possess a very elaborate stomach structure. It is divided into 3 segments, making it the most complicated stomach morphology as far as rodents are concerned.

The Desmarest's hutia is listed as Least Concern (LR/lc), lowest risk. Does not qualify for a more at risk category. Widespread and abundant taxa are included in this category, on the IUCN Red List of Threatened Species

Some facts about the
Cuban hutia