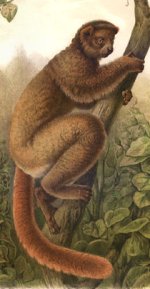 The Eastern Avahi (Avahi laniger) is a woolly lemur that lives on Madagascar. They weigh between 600 - 1300 grams and can reach lengths between 30 and 45 centimeters. They belong to the family Indriidae, which also includes the Indri. The Eastern Avahi is similair to the Indri in feeding behavior, both eat the leaf blade, not the midrib or petiole. They live in the same areas. This is possible due to the difference in activity times, the Eastern Avahi is nocturnal, while the Indri is diurnal. Avahis mate for life, stay with each other and raise their young as a family. Avahis live in the trees. When on the ground, avahis stand erect and move with their hands in the air just like sifakas.

The Avahi, eastern woolly lemur, woolly indris, woolly lemur is listed as Near Threatened (LR/nt), is close to qualifying for or is likely to qualify for a threatened category in the near future, on the IUCN Red List of Threatened Species

Namings for the avahi or woolly lemur

A avahi or woolly lemur group is called a 'troop'.