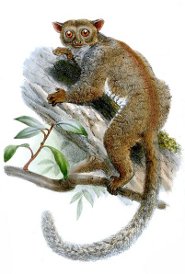 This small primate has an interesting way to escape from predators like birds of prey – it leaps from a tree, spreads out a thin flap of skin which acts as a parachute and glides to another tree trunk or the ground. But this adaptation cannot help it against its primary predator, humans.

The pallid needle-clawed galago strongly resembles a lemur. It has a furry, monkey-like body with a long tail, a pointed head and prominent triangular ears. Fur color can vary from a cinnamon brown to a sandy tan. The belly, chest, inside of the legs and most of the tail are pearl grey to white. A dark colored stripe runs along middle of the back. The eyes are large and owlishly round. Eye color varies from yellow to a reddish orange.

The toes on all four paws have adapted to gripping tree limbs. It also helps the small primate to run down tree trunks like a squirrel. The second toe on the hind legs has a nail slightly different from the other toenails. The pallid needle-clawed galago uses this toe to help groom itself. The teeth on the lower jaw are used as a comb. Adults grow to a weight from 0.59 to 0.79 pounds (270 to 360 grams.)

Pallid needle-clawed galagos are not friendly and live solitary lives. The exception is for related females, which may get together for mutual grooming. Males and females hold individual territories which they guard vigorously. They mark territory with their urine and with loud calls. Males hold larger territories than females. Females give birth to a single baby that already can open their eyes and cling to fur. Females also carry babies around in their mouths.

These animals sleep during the day and search for food at night. They have a very specialized diet – tree sap, resin or gum. They cannot live in mountainous forests because those trees do not produce the type of resin or sap that they need to eat. It is unknown how long these primates live.