Northern Pika - The Whistle-Blowers of the Wild 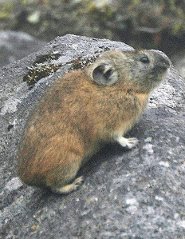 Northern Pika (Ochotona Hyperborea) are remarkable small burrowing animals that are quite similar to a rabbit. They mainly inhabit the southern regions of Siberia, the northern regions of Mongolia, Manchuria, North Korea, and part of Russia and Japan. Commonly found throughout these areas, they are not endangered. Northern Pika prefer damp rain forest habitats that boast rocky formations, suitable for burrowing in and around fallen trees. Their bodies are around 127-186 mm (5-7 inches) long, plus a tail that is 50-120 mm (1-4inches) in length. They are covered in soft reddish-brown fur, and sport hind limbs that are shorter that their front limbs. Males and females resemble each other and can be difficult to tell apart.

Prior to World War II, they were best known for the value of their hide. They were trapped in large numbers for production of a fine felt. With the advent of newer and more economically sound materials, trapping and killing has ceased. Communication occurs by means of a distinct, high whistle that serves multiple purposes. This vocalization is common from males during breeding season, and in between mated pairs. A short and abrupt type of whistle is used to alert others to danger or if predators are spotted. The sound is so unique that it can be used to identify other specific individuals within a group. Their diet consists mostly of grasses, seeds, leaves, and other plant material. Food gathering consists of collecting varied types of vegetation and leaving it in the open to dry out. Once cured, it is then moved to a storage place, where it will accumulate into "hay piles". Mated pairs consume this store of food over the winter.

Northern Pika are also known to consume part of their own feces. It is thought that this is due to the highly digestible energy found in fecal material. During winter, they will dig tunnels into the snow to obtain fresh vegetation. They are a valuable link in the food chain and serve as prey to birds and other native carnivores. The foraging habit of storing supplies of food also provides substance for smaller herbivores, such as deer, who will poach their "hay piles".

The Northern pika is listed as Least Concern (LR/lc), lowest risk. Does not qualify for a more at risk category. Widespread and abundant taxa are included in this category, on the IUCN Red List of Threatened Species

Some facts about the
Northern pika